Nicholas George Wertheim, known as Nicky, was born on 19th May 1909 in Hampstead, London. His parents were Rudolf and Babette Wertheim, both from German-Jewish families. He had two siblings - an older sister Charlotte and a younger brother Robert, known as Lottie and Bobby. Due to anti-German feeling in the First World War, the family changed their name to Wortham. Babette became Barbara and both Lottie and Nicky were christened. After the war they changed back to Wertheim but in 1938 to avoid seeming German once again, they changed one last time to Winton. 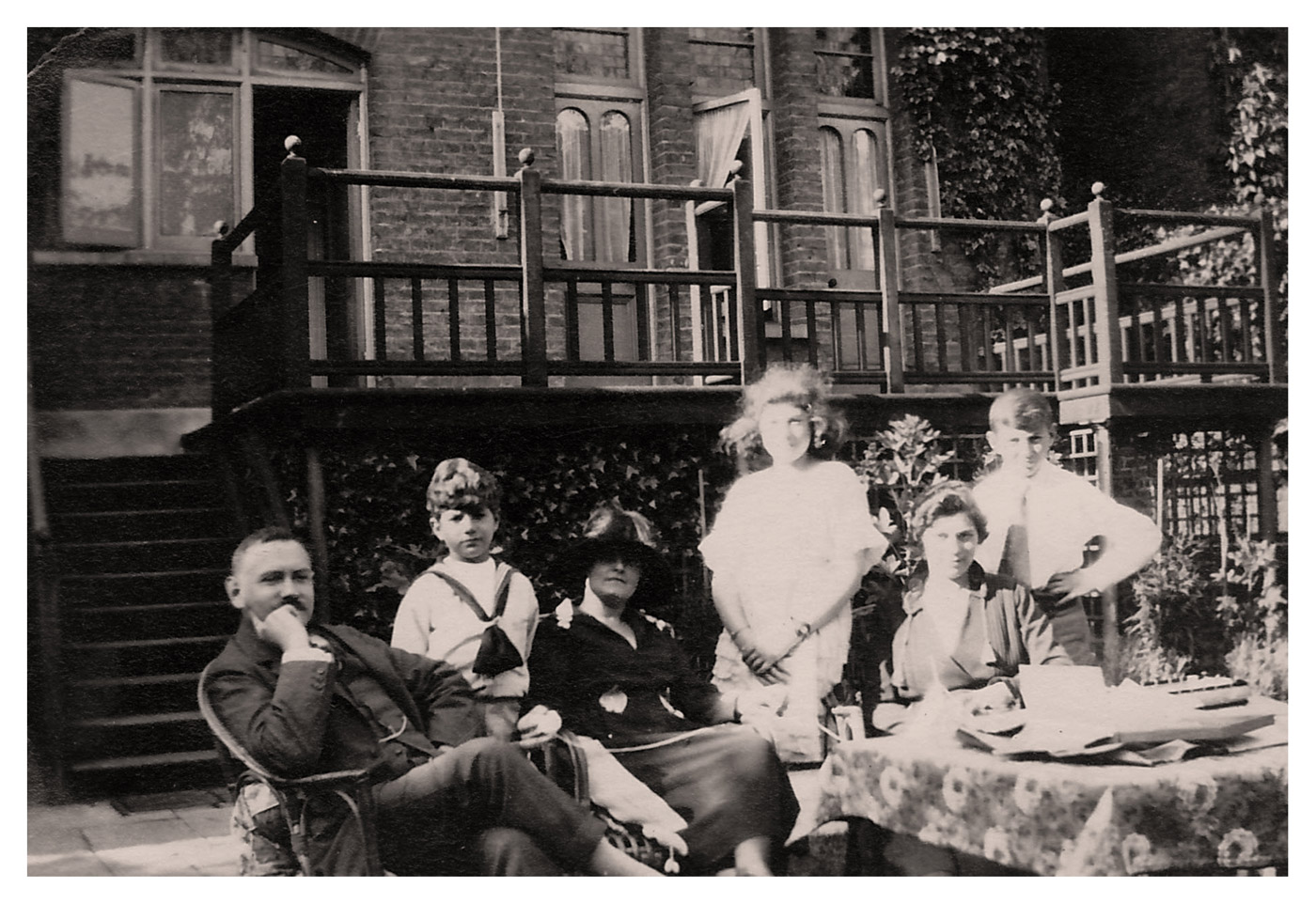 Nicky, Lottie, and Bobby at home in the garden circa 1917.

Nicky enrolled at the famous British public school, Stowe, in its first year of opening in 1923. Although he only attended for three years, aged 14-17, his time there had a huge influence on his developing character. He was inspired by the charismatic principal, J. F. Roxburgh, and stayed in touch with him for many years.  It was also where he learnt and developed his love and skill at fencing, a sport he excelled at and continued into his 40s.  He regularly attended the school chapel and became confirmed in March 1925. 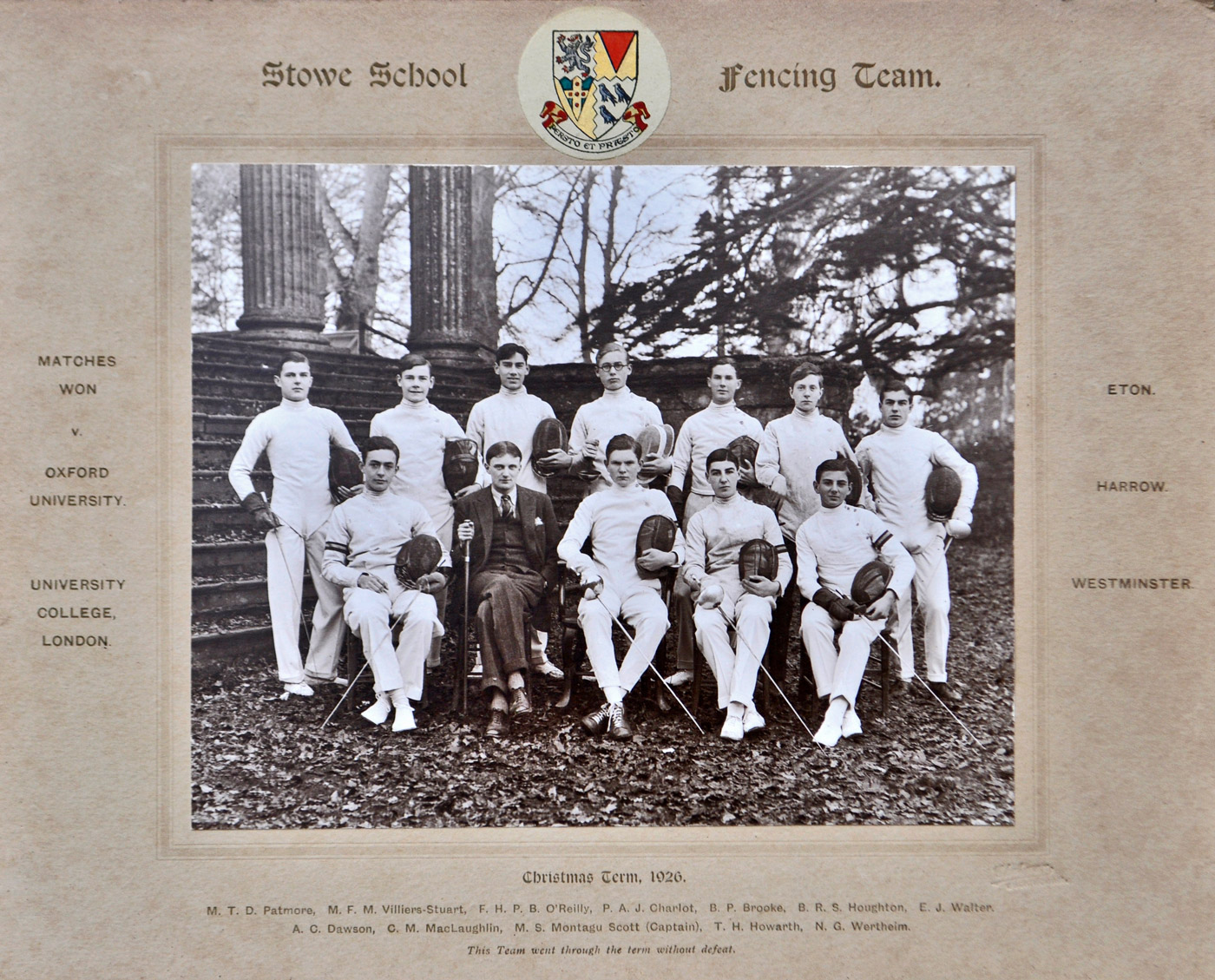 Stowe Fencing Team, Christmas Term 1926. Nicky seated end right. Nicky started fencing at Stowe when it was offered as an alternative sport to cricket. He was not a fan of cricket but enjoyed fencing and quickly became adept. His fencing tutor was Felix Gravé, who ran a Fencing school, Salle Bertrand, in London and was coach to the Oxford University team. The Stowe team won all their matches that term against three public school & two university teams.

These were part of Nicky’s fencing kit, in use from the mid 1920s until the early 1950s. He fenced with foil as well as épée.  After Stowe, Nicky continued fencing at Salle Bertrand in London where, astonishingly, he had the occasional bout against another member, Oswald Mosley, head of the British Union of Fascists. (They did not talk politics!) He fenced competitively in the UK throughout the 1930s & when in Hamburg (1929) and Paris (1947/8).  In 1938 he was part of the England team and was in consideration for the British team for the 1940 Olympic Games, which were cancelled by the war.  With his brother Bobby, another keen fencer, they set up the Winton cup in 1950 to promote national team competition.  It continues to this day at three levels: Cadet, Senior, Veteran.  Bobby remained active in the Amateur Fencing Association for over 50 years, being honoured for his work with an MBE in 1987. 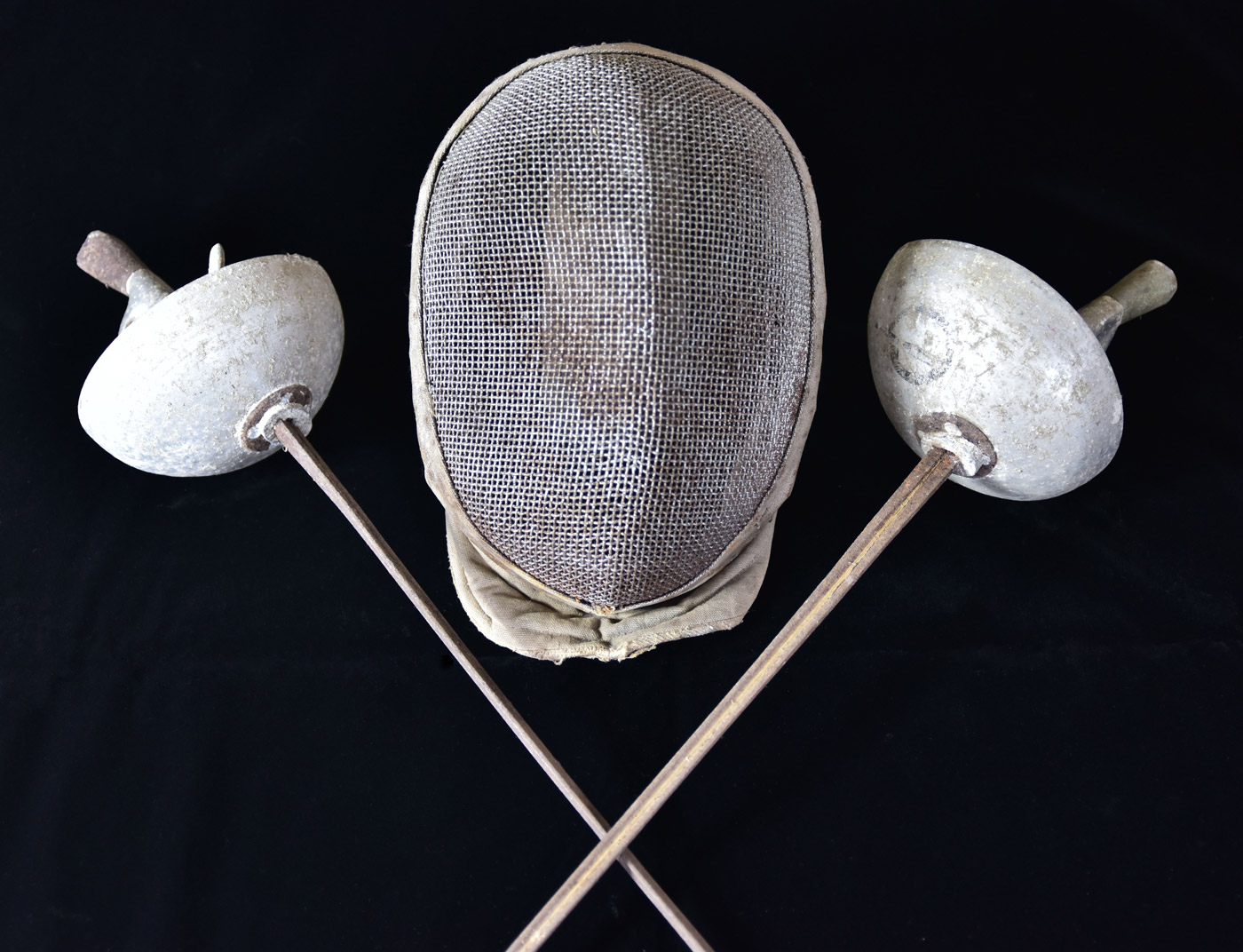 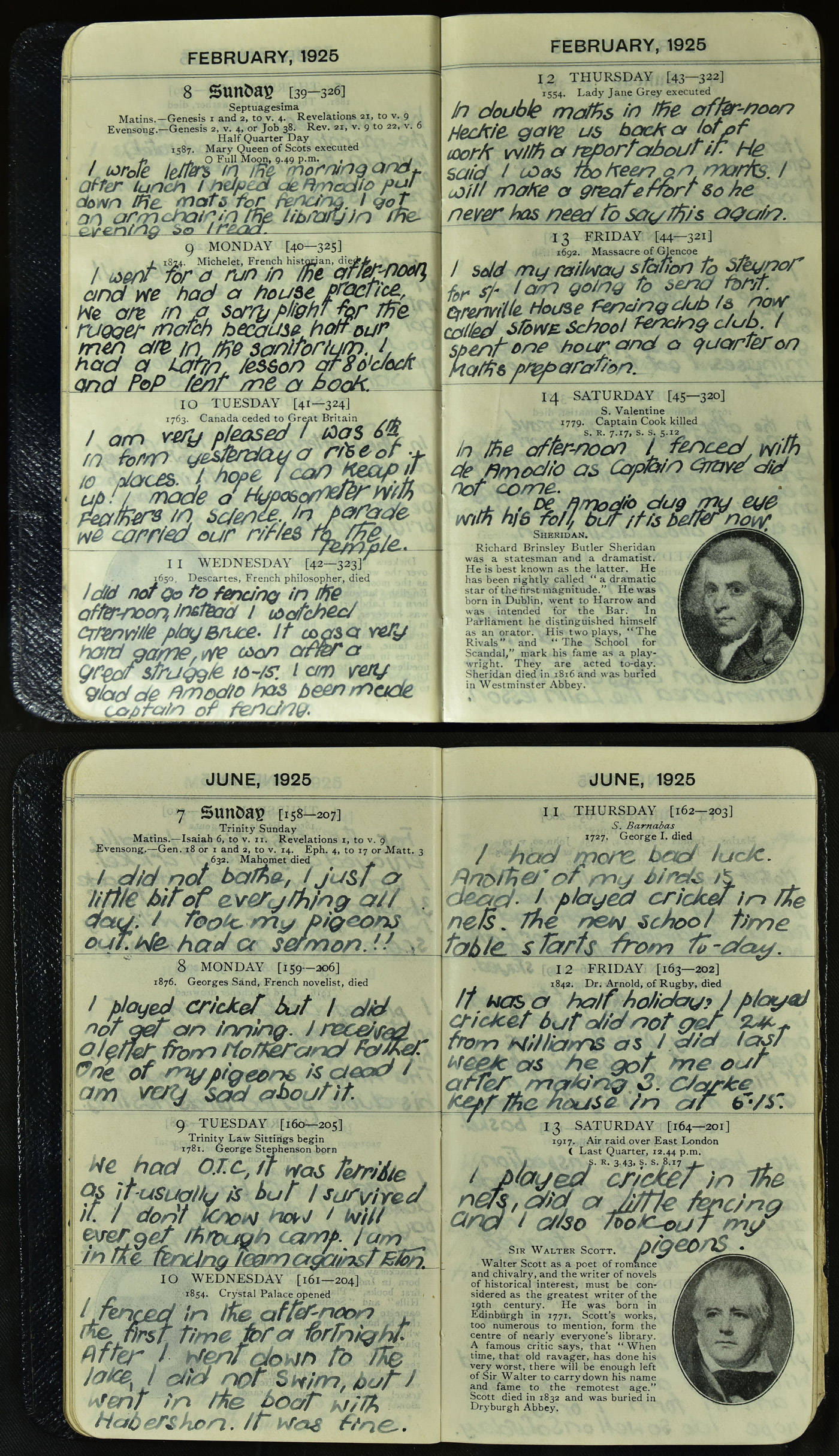 Nicky only kept diaries for 15 months of his 3 years at Stowe. These detailed mostly his sporting activities and hobbies, plus notes in the back of his position in class for various subjects. He also listed the many books he read and the letters he received from family and friends, both of which were obviously of great comfort to him.

In the early days of Stowe there was a zoo where pupils kept animals.  Nicky’s hobby of keeping pigeons involved making the cages in woodwork class and then taking the birds out on walks to fly back to their home.  The zoo was eventually closed down as the pets became more exotic and difficult to look after!

After school, at his father’s suggestion he went into banking, starting out as a clerk. His training, typical of the time, took him to banks across Europe from Japhets in London, Behrens in Hamburg, Wassermann’s in Berlin, and the Banque Nationale de Crédit in Paris.

The Great Depression spreading worldwide cut short his training. He returned to the UK and, after six more years in banks and transferring into the stocks and shares section, he became a stockbroker at the London Stock Exchange.

Diary entries for June and July 1929, while at Behrens Bank in Hamburg.

As a 20 year old undergoing banking training in Germany, Nicky made full use of his free time, making new friends and visiting clubs, the theatre and opera.  His parents had friends in Hamburg, his first location, and the diary entry above describes his invitation to a Shabbat dinner.  His response to being considered Jewish shows how distanced he was from his heritage.

Despite his hectic social life, some of those he met he found too wild. His skill at fencing meant that the Hamburg club was pleased to invite him to join.  He even fenced for them in a competition against a Danish club in Copenhagen. 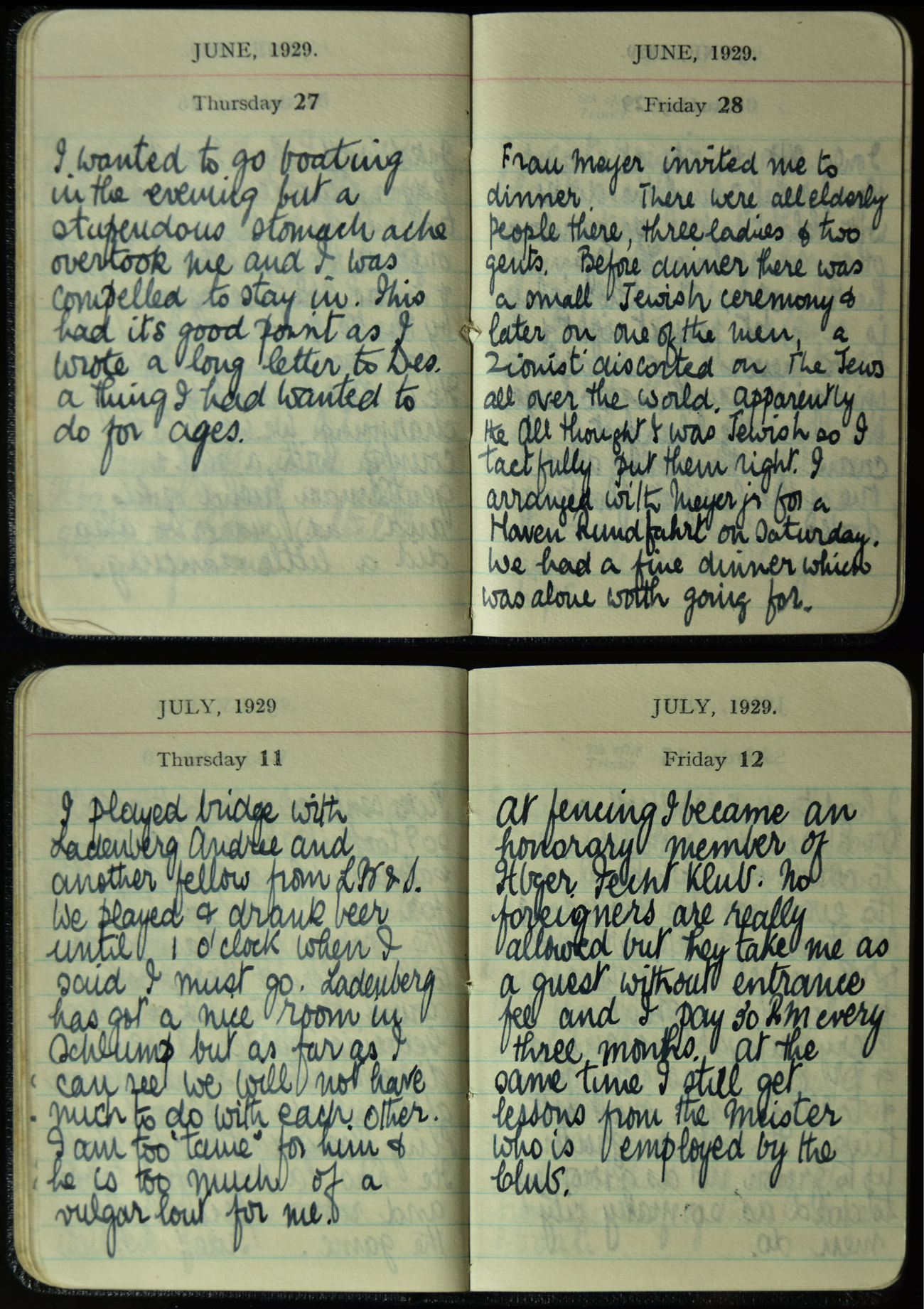 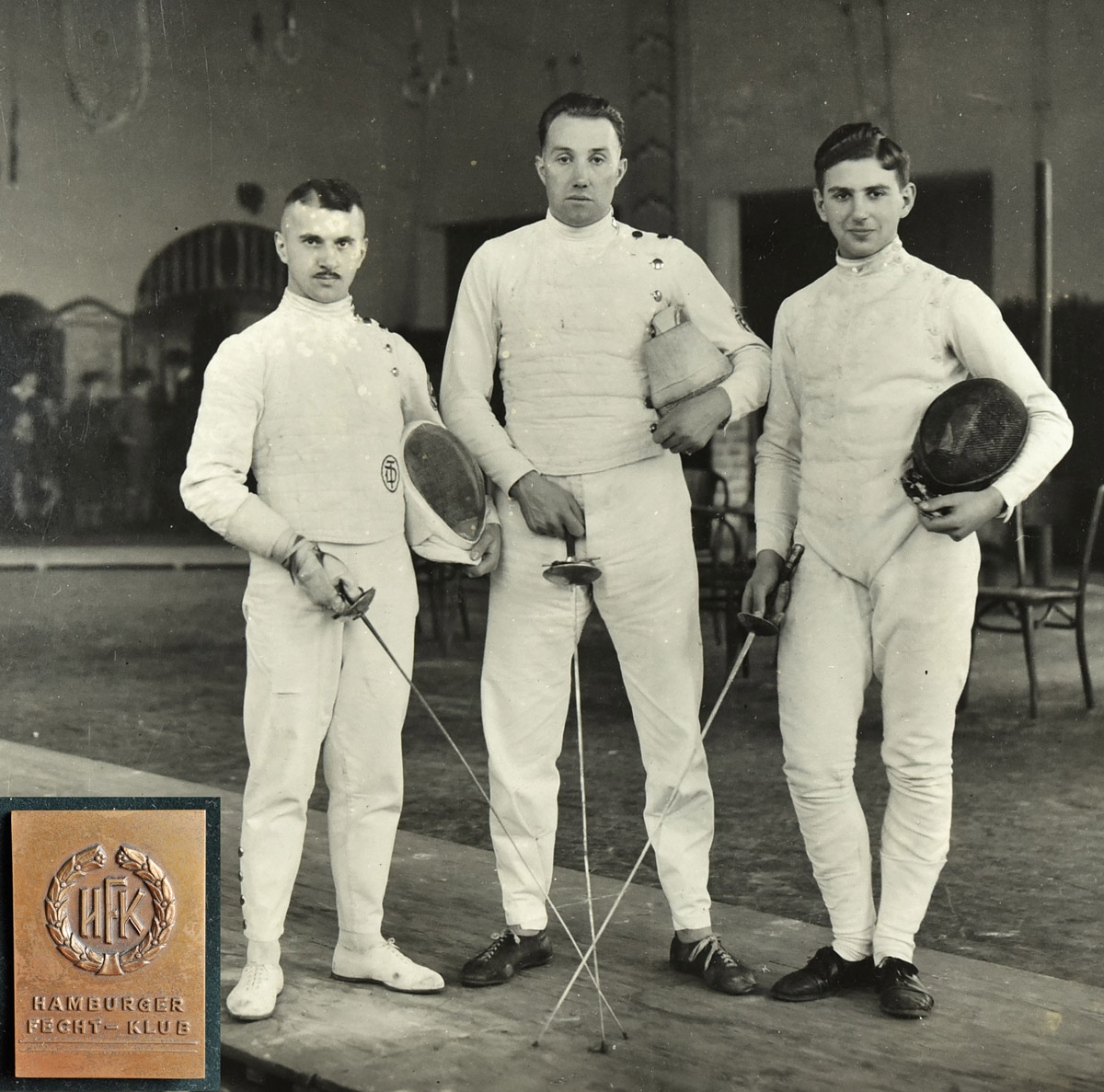 Witnessing the devastating effect of the Great Depression on British workers and their families in the early 1930s led Nicky to politics. He joined the Labour Party, becoming friendly with influential centre-left MPs like Aneurin Bevan, Jenny Lee, Stafford Cripps and George Russell Strauss. His connection with them continued through the 1940s.  Their lively discussions about Hitler’s true intentions and the futility of appeasement prepared Nicky for understanding the situation in Czechoslovakia as it developed. 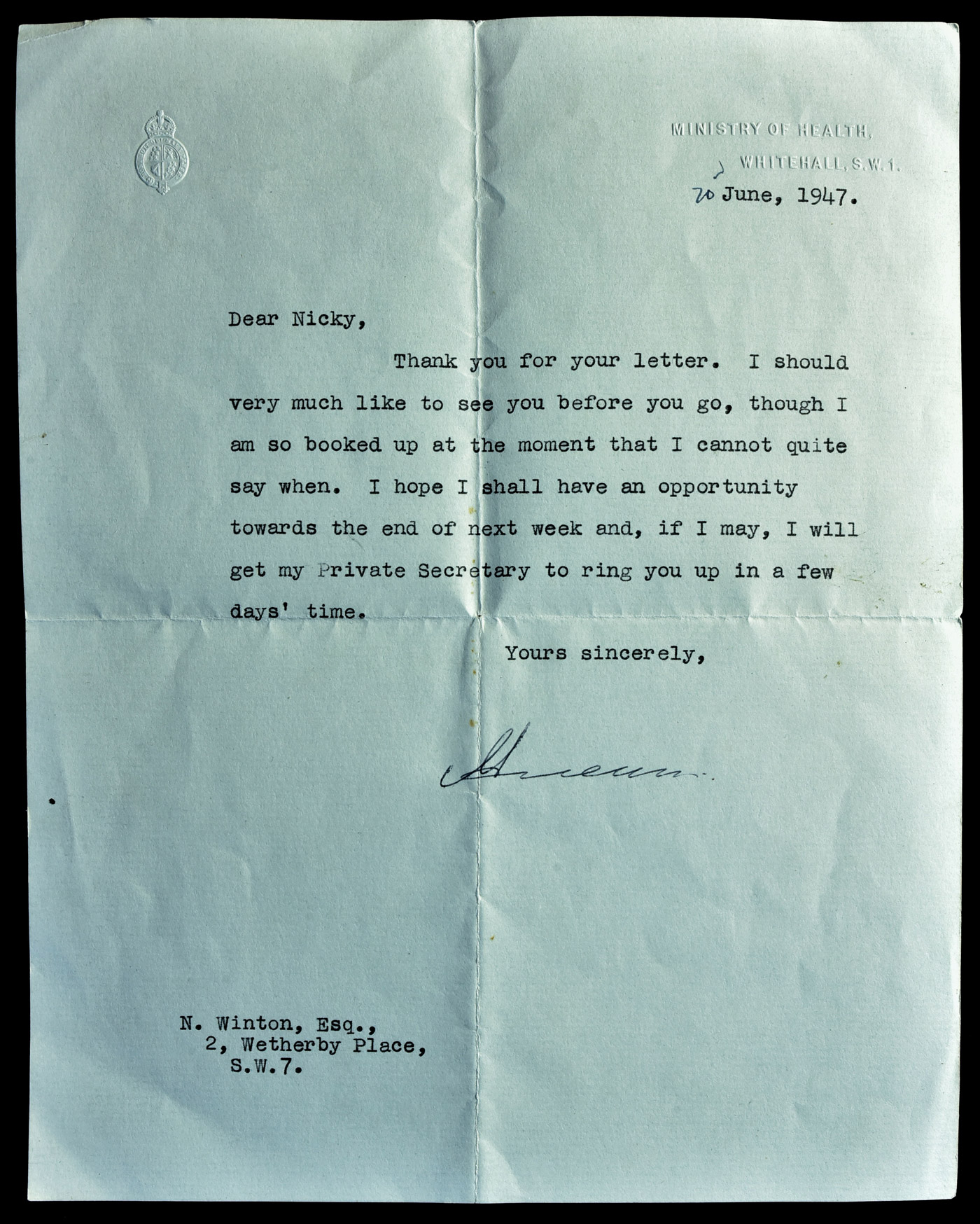 Bevan was appointed Minister of Health in the post-war Labour government and, after gaining Parliamentary consent to the National Health Service Act in 1946, was preparing to introduce the NHS in 1948. Nicky told of spending the evening with Bevan before he brought the Act to Parliament.  This letter was to arrange to see Nicky before he left the UK to take up his post at the International Refugee Organisation in Geneva.