The word ‘Kindertransport’ is used to describe the large scale transportation by train of ten thousand endangered, mostly Jewish, children from Austria and Germany to safety in the UK in 1938 and 1939 (Kinder means children in German). The same term became used for the Czech and Slovak rescue of endangered children which was organised in 1939 by Nicholas Winton with the help of Trevor Chadwick and other volunteers both in Prague and London.View Timeline and broader Kindertransport description

Just before Christmas 1938, Nicky had a phone call from his good friend Martin Blake, another Labour party member. They were due to take a party of schoolboys from Westminster School, where Martin was a teacher, on a skiing holiday. Martin had phoned to cancel and tell Nicky that he was in Prague and Nicky should come out to see what he was up to. 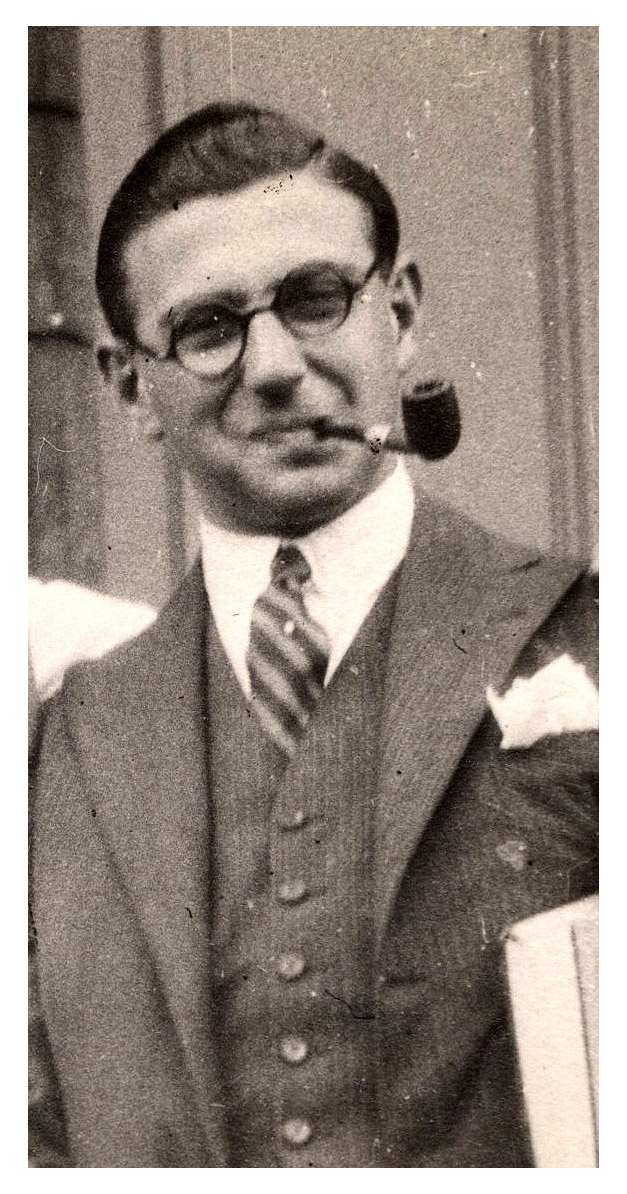 Nicky arrived in Prague at New Year and was immediately introduced to Doreen Warriner, the volunteer head of the Prague office of the British Committee for Refugees from Czechoslovakia (BCRC) who Martin was assisting.  They were helping refugees who had fled Sudetenland after the Munich Agreement on 29 September 1938. This gave the Sudetenland to Hitler in return for “peace in our time”, a guarantee by Hitler of no further expansionist claims. Their work was mainly with those on Hitler’s ‘wanted list’ – anyone who had criticised him or he felt was a threat - particularly Social Democrat politicians, communists and other intellectuals, who would be arrested if they fell into German hands. These families were being sent via Poland to safety abroad – a huge undertaking being accomplished in the maelstrom of a city under siege from the thousands of Sudeten refugees desperate for help – food, money, shelter and safety. 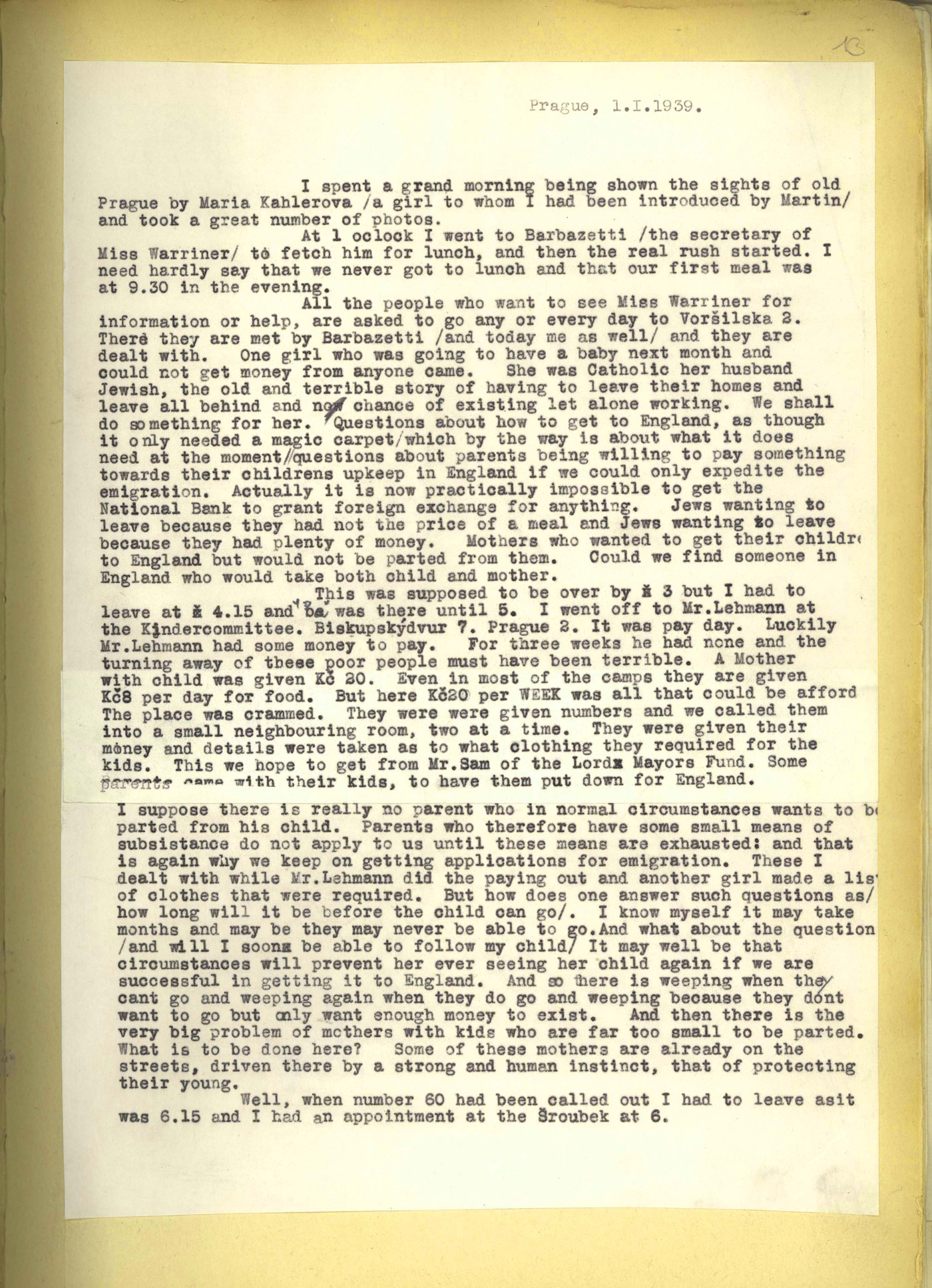 Copy of Nicky’s letter to his mother dated 1st January 1939 giving his first impressions on arriving in Prague. The letter discusses his early thoughts on the conditions for refugees in Prague and the heart-breaking difficulties they faced. The original letter is in the scrapbook which he was given by a fellow volunteer after the Kindertransport project came to an end, containing many details of the work done, including the list of children brought to the UK.  The scrapbook was donated by Nicky to Yad Vashem, the World Holocaust Remembrance Centre in Jerusalem, Israel, in 1989.

The crisis unfolding in Czechoslovakia became clear to Nicky over the first few days as he assisted at the offices of aid agencies and visited refugee camps that surrounded the capital.  Having seen the appalling conditions families were forced to endure in the camps, he felt compelled to try and help.  He discussed with Doreen the possibility of trying to do something for the children who were not being considered by other aid groups.  Distressed parents were already asking him if there was any way of their child being sent to safety in Britain and, with Doreen’s encouragement, he decided he should try and help them.

Copy of Nicky’s letter to his mother, dated 14 January 1939. It describes his frenetic pace of activity in planning the developing rescue project. In the letter he is already conscripting his mother as his assistant as he prepares for his return to London. 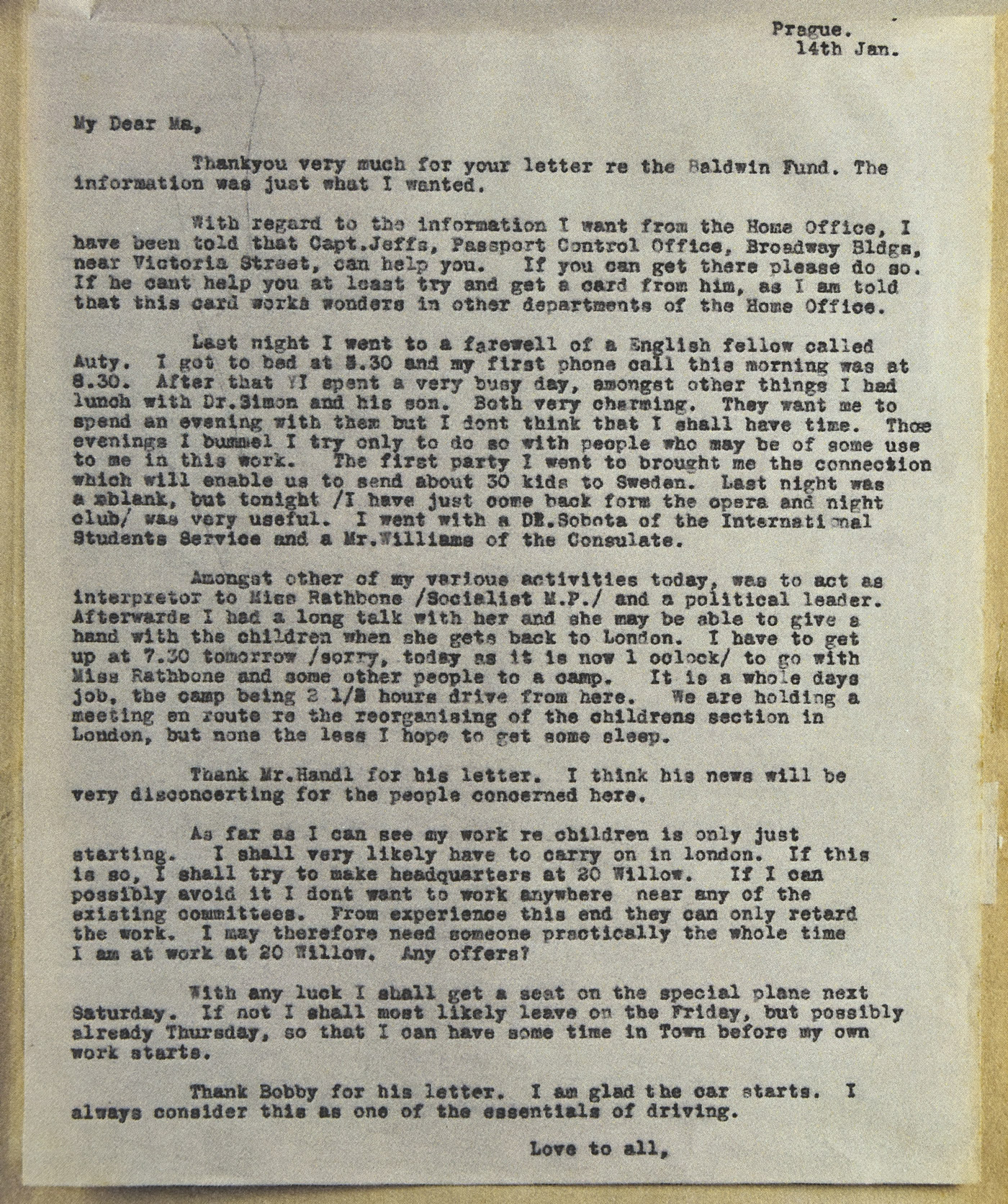 While in Prague he met an English schoolmaster, Trevor Chadwick, who had come over to sponsor two refugee boys to house at his school in Swanage. Trevor, like Nicky, was moved by the plight of the children, and offered to manage the Prague end of the operation if Nicky could get government permission to bring unaccompanied children into the UK.

After three weeks in Czechoslovakia, Nicky returned back to work but lost no time in getting his project off the ground.  His application to the Home Office, considered by others to be an impossible task, was soon accepted – with qualification.  He had to find a foster home and a £50 guarantee (£2500 today) for each child he brought over.  With Home Office agreement in place, he notified Trevor who gave up his job and returned to Prague.  With the help of others concerned for the refugees’ plight, he wrote to newspapers and magazines to ask for foster parents to come forward and for guarantors to pay the £50 per child (the government condition to cover repatriation costs post conflict).  Other organisations and refugee committees helped where they could.  In March the transports began. 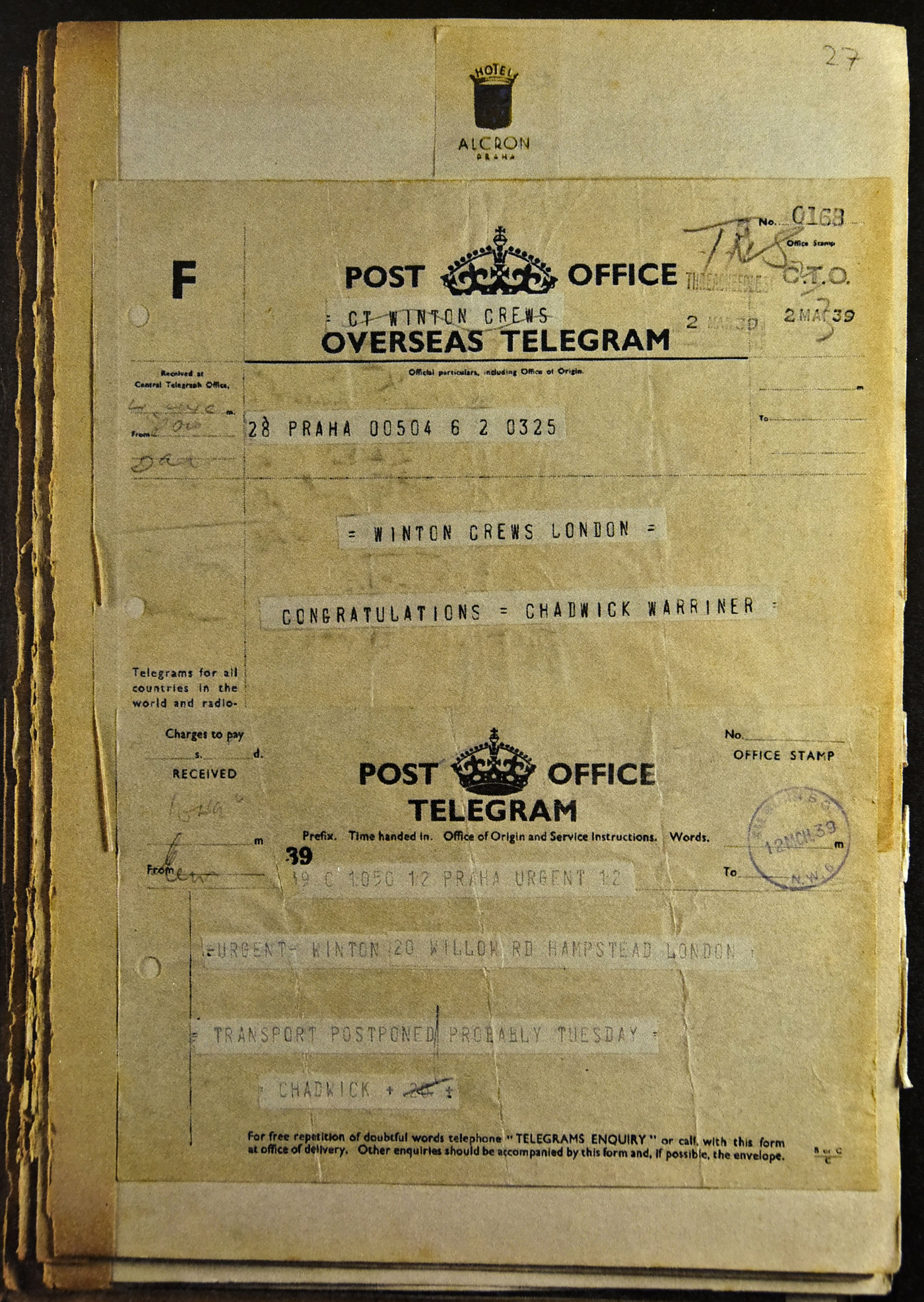 Copy of two telegrams in the scrapbook, dated 2nd March and 12th March 1939. The first is from Doreen Warriner and Trevor Chadwick, the second from Chadwick alone to Nicky. The first may be after Nicky obtained permission from the UK Home Office to bring in unaccompanied children or getting the first set of visas accepted. The second is regarding the first transport, postponed for two days, which eventually left on 14th March, the day before the Germans occupied the whole of Czechoslovakia.

Copy of newspaper cuttings in the scrapbook. They detail the Barbican Mission flight of 12 January, an article by Martin Blake about the situation in Czechoslovakia  and an April letter from Rev. Rosalind Lee requesting assistance for Czechoslovak children, giving Nicky’s details.  The Rev Lee was a Unitarian Minister who put great efforts into helping the Czechoslovak refugee situation. 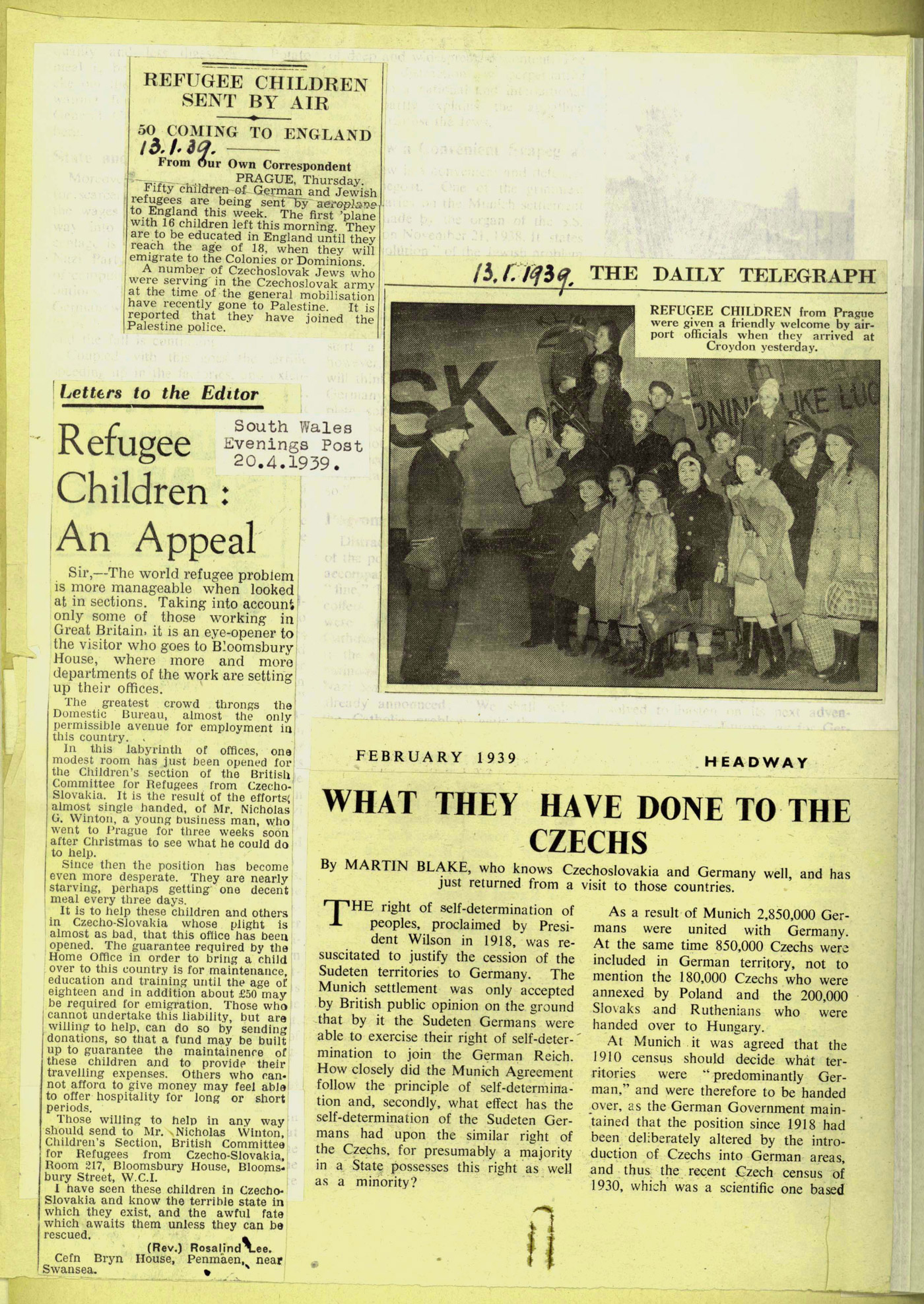 The first group of children left the day before the Germans invaded the whole of the country on 15th March 1939. Hitler had broken the Agreement, as Nicky and others believed he would and Prague came under German occupation. From then on Trevor Chadwick had to deal with the Gestapo to get exit permits stamped for each group of children ready to travel. As foster families and guarantors came forward to offer help through the spring and summer, eight transports bringing 669 children left Prague for London.

The children, wearing identity tags, were allowed to take one small suitcase and one travel bag for food for the journey. German soldiers came into their carriages to ensure they did not smuggle out valuables, in many cases turning out suitcases and causing fear and misery. They travelled through Germany to Holland where the children embarked by ship to Harwich, Essex. Trains arrived in London at Liverpool Street Station where the children were met by Nicky and other helpers.  There they were entrusted to the foster families who had agreed to give each child a home and who had come from all over the country to collect them. 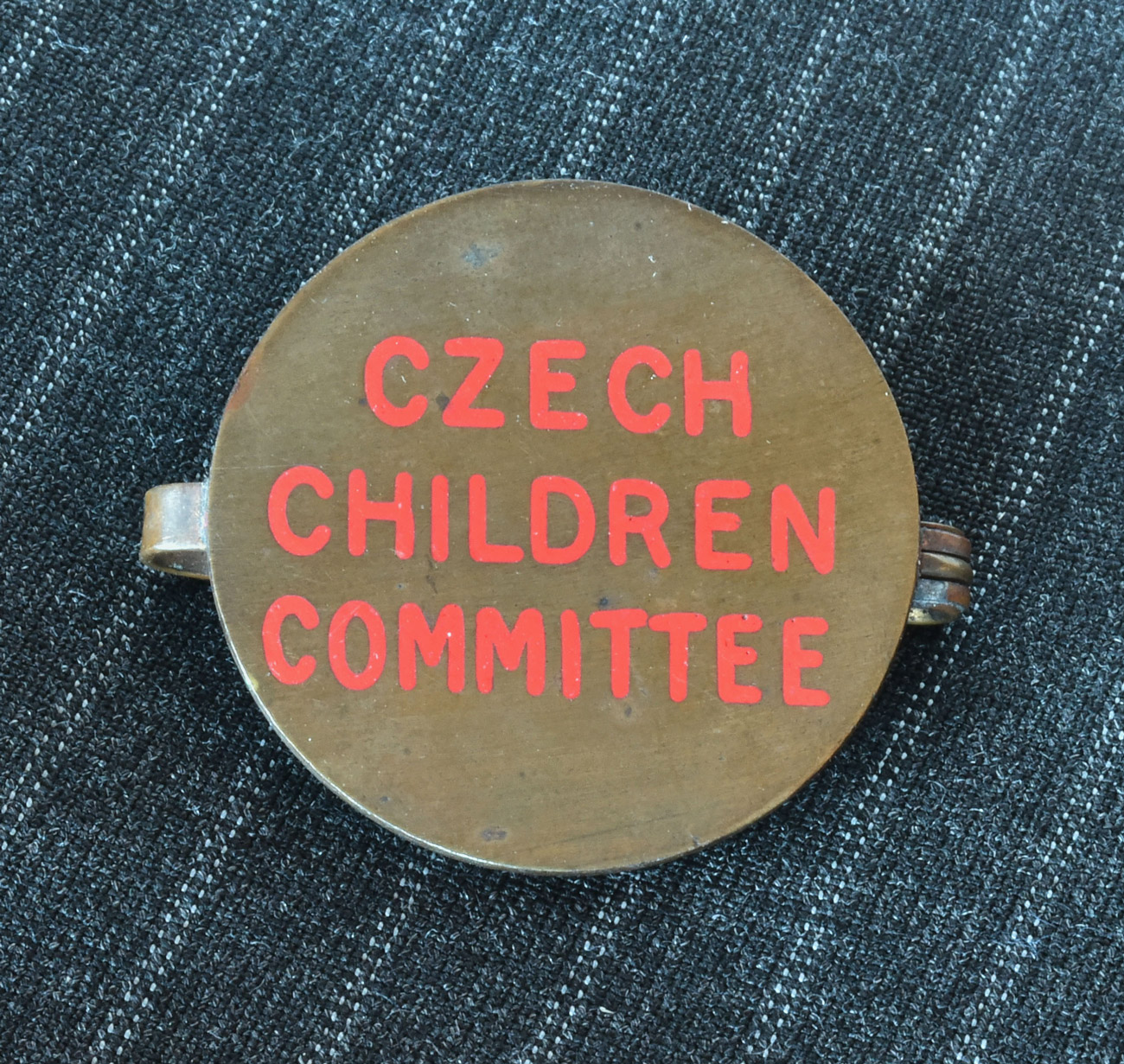 Once the Germans had invaded, Doreen and her team came under scrutiny and had to flee in April before they were arrested for helping wanted adults escape.  Trevor followed in early June as his own activities, perhaps assisting Doreen, were thought to endanger the Kindertransport programme.

R.J. Stopford, the official at the British Legation in Prague, who had been supportive of Doreen’s work whilst appearing to remain above suspicion to the Germans, also left in May.  The Kindertransports continued through the summer under the supervision of Mr Creighton, a British civil servant, followed by Mrs A.E. Guthrie who only left Prague after war started.

The largest transport of 250 children, organised to leave on 1st September, was cancelled on that day by the Germans.  They had invaded Poland and all borders were closed.  Two days later Britain declared war.  It is thought that nearly all the children due to leave on that train were eventually sent to Terezin concentration camp just north of Prague, and later to Auschwitz. 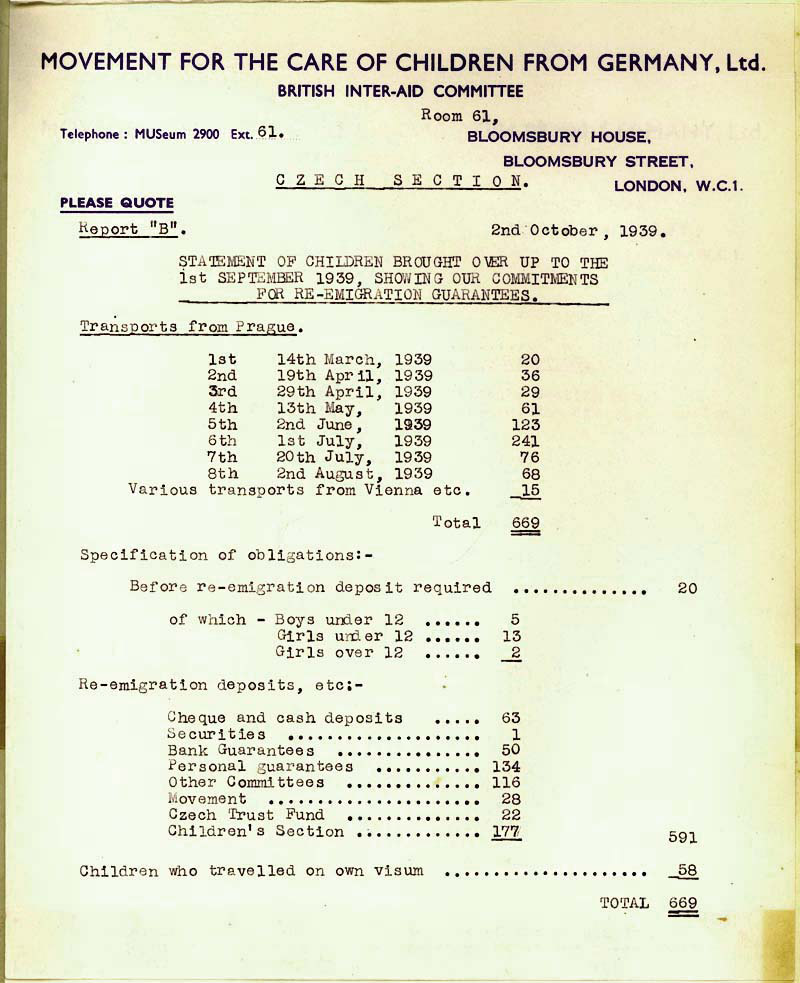 Copy of Report B Transports from the scrapbook, dated 2 October 1939.  This details the transports and number of children on each, plus the finances involved.

As no further transports could be organised, the operation ended & his mother, Barbara, who had been assisting him in the office, took on the after-care of any of those children who needed extra support.

Copy of photo of Barbara Winton, Nicky’s mother, from the scrapbook, at work in the Kindertransport office. 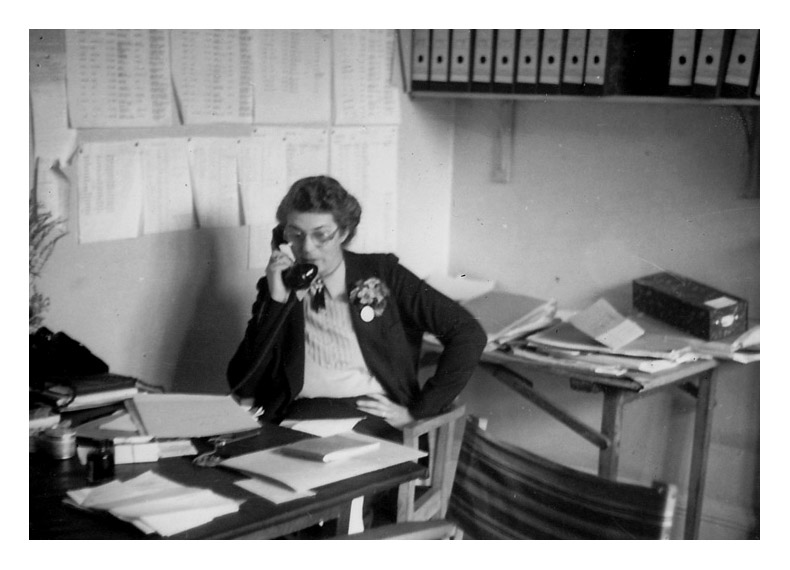 At the end of 1939, a fellow volunteer on the Kindertransport project, W.M. Loewinsohn, put together a scrapbook of letters, reports, photos and other documentation from their work and gave it to Nicky as a memento. Fifty years later the scrapbook became the catalyst that brought the story of the Czech and Slovak Kindertransport into public view. 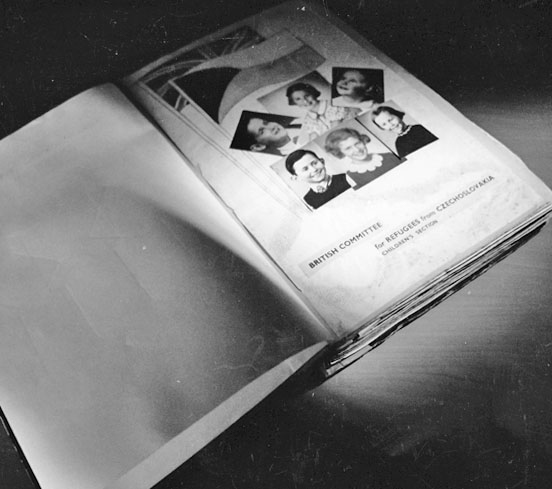 Copy of the front inside page of the scrapbook. This contains some of the photos of the Kinder, as needed for their visa application.

Recognition: 50 years after the Kindertransport, the rescue is revealed. Visit this Page.