Nicky left the Stock Exchange in August 1939, to volunteer as leader of his local Air Raid Precautions depot being set up by Hampstead council.  By March 1940, with little activity in that role, he volunteered for the Red Cross as an ambulance driver and joined the first wave of ambulances across the Channel to France. 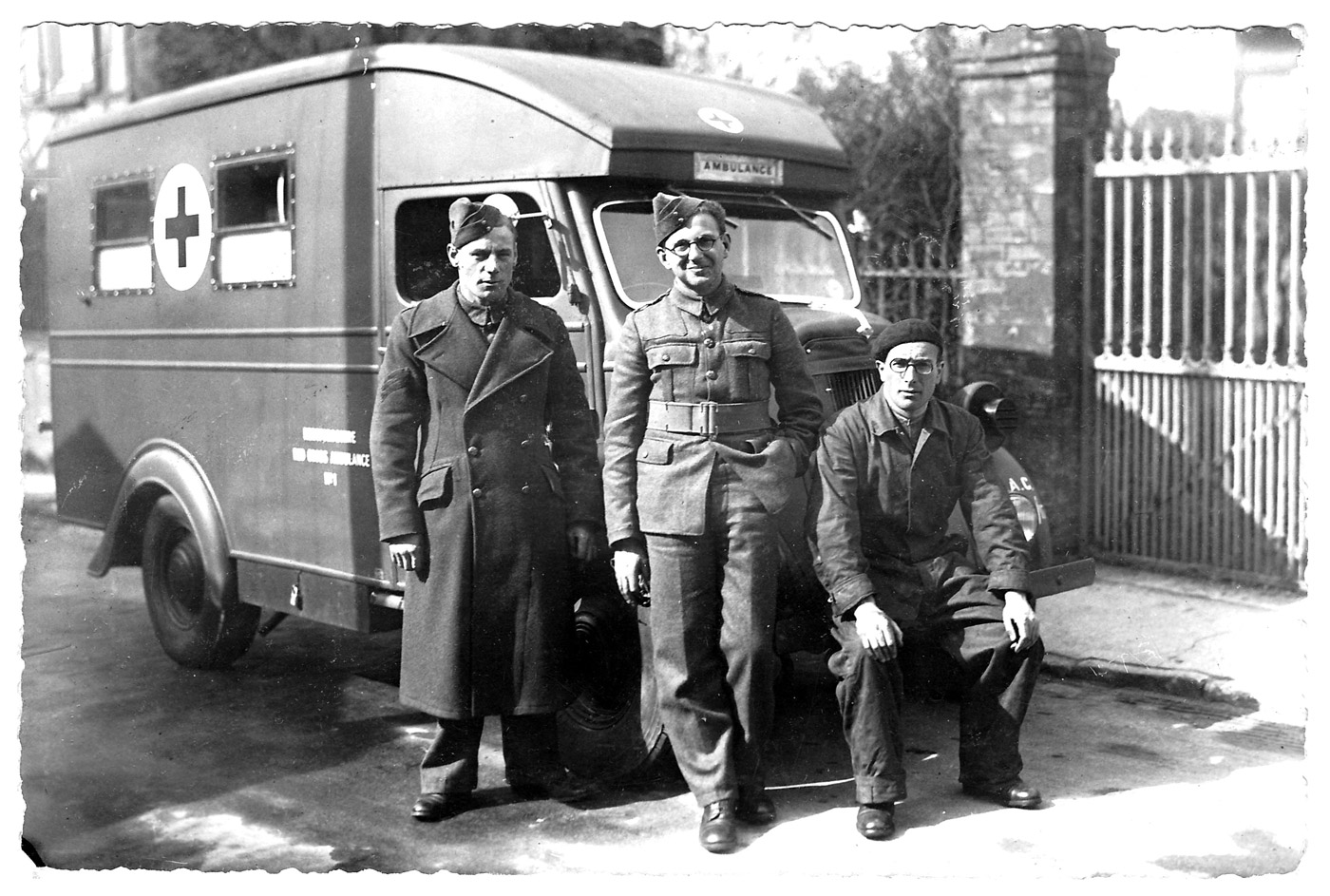 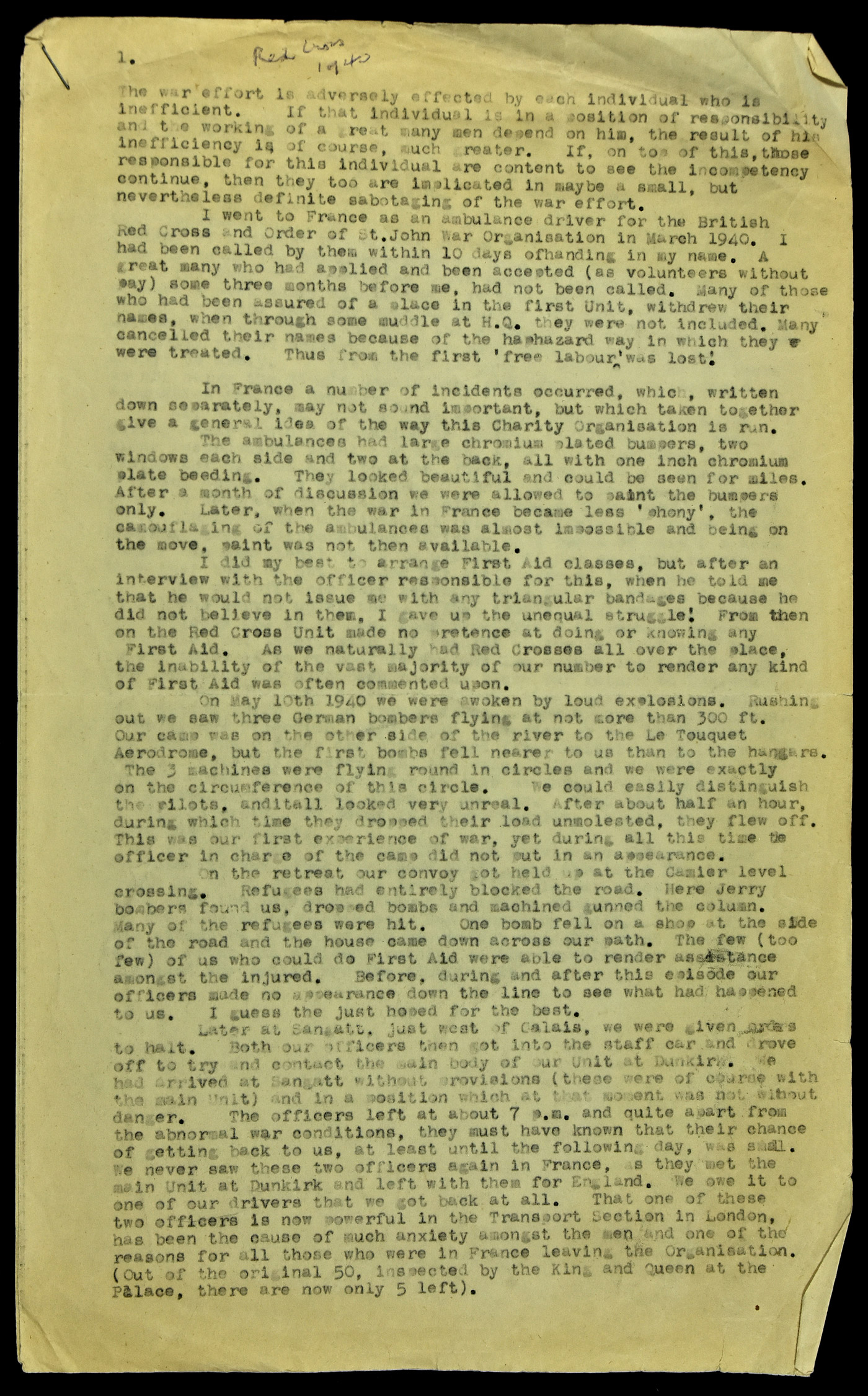 First page of notes Nicky made of his Red Cross experience in northern France just prior to the Dunkirk evacuation, April-May 1940. While there, Nicky attempted to organise First Aid classes for the crews but without success and describes how their lack of expertise was noted by the troops. 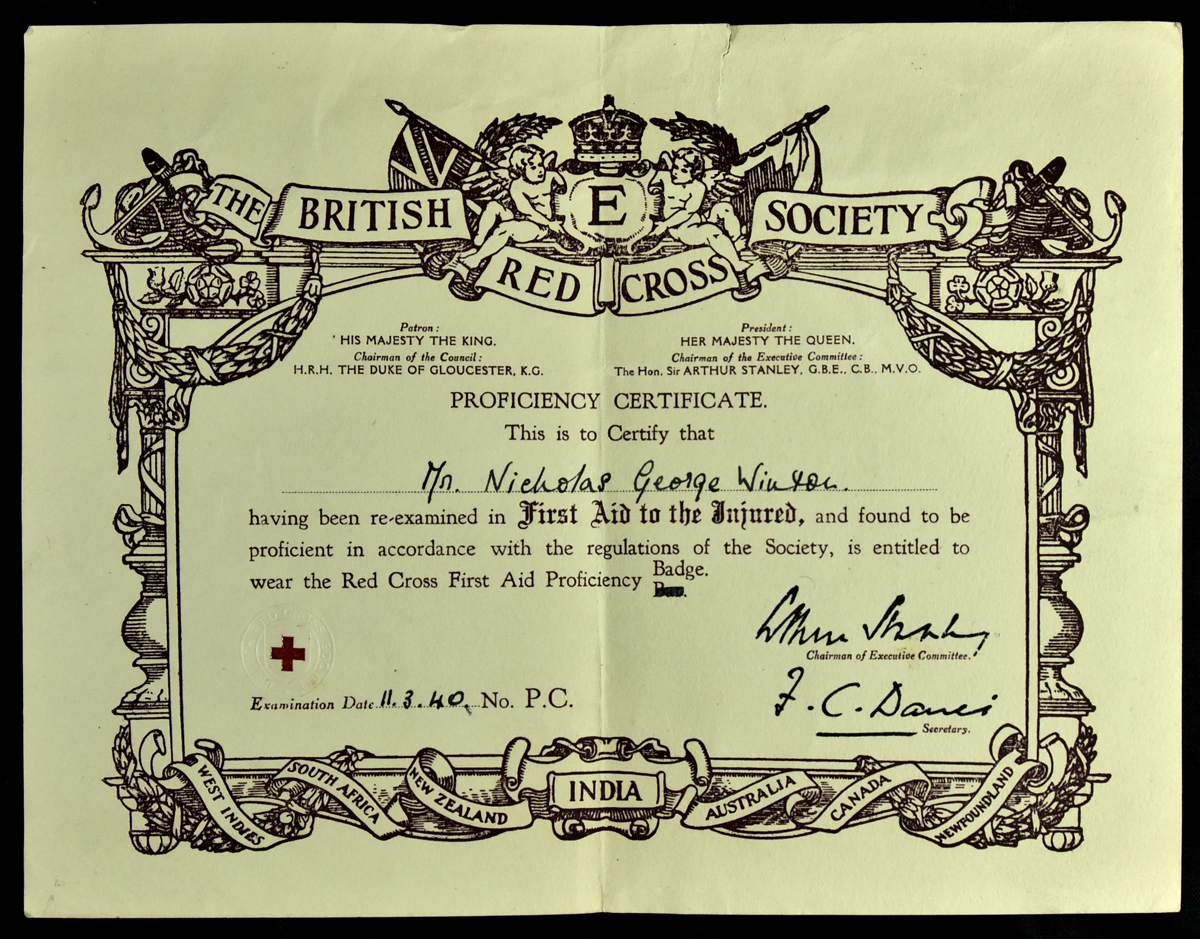 In 1942 Nicky entered the RAF as a night flight trainer, having been turned down as a pilot due to his poor eyesight.  He trained pilots in the UK & from 1946 in La Rochelle, France.  The latter part of the war was spent as part of a team taking an exhibition about the RAF’s wartime contribution around Europe, to Brussels, Paris, Lyon, Oslo and Prague.  Spending time in these locations and driving through post-war Germany, he took photos and wrote about the destruction & hardships he witnessed. 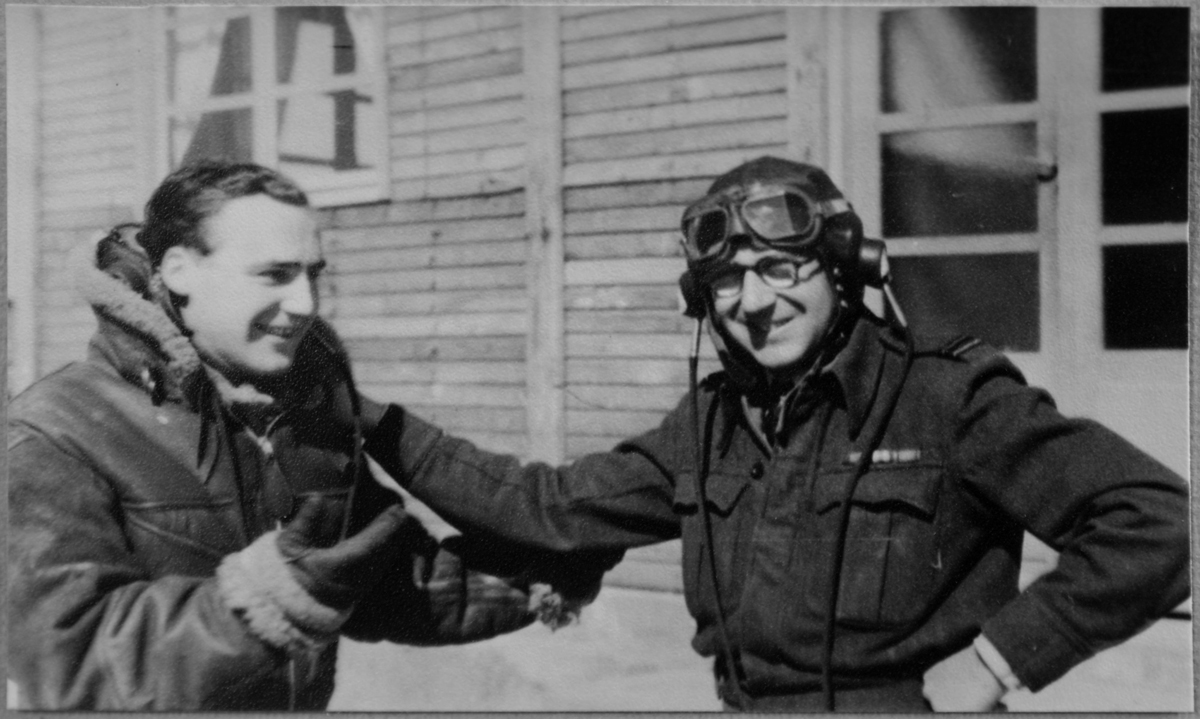 Photo of Nicky and pilot friend during his time in the RAF from 1942 to 1946. As he wore glasses, he was not considered suitable as a pilot but was accepted as a Pilot Trainer. His role was to train pilots in night flying using the new Link Trainer, an early flight simulator. Most pilots flew by sight and the Link trained them to navigate by instrument so they could fly safely at night or in cloud.

Photo of bomb destruction in Frankfurt, Germany. This photo taken by Nicky in 1947 shows the Fountain of Justice still standing in front of the bombed out cathedral. 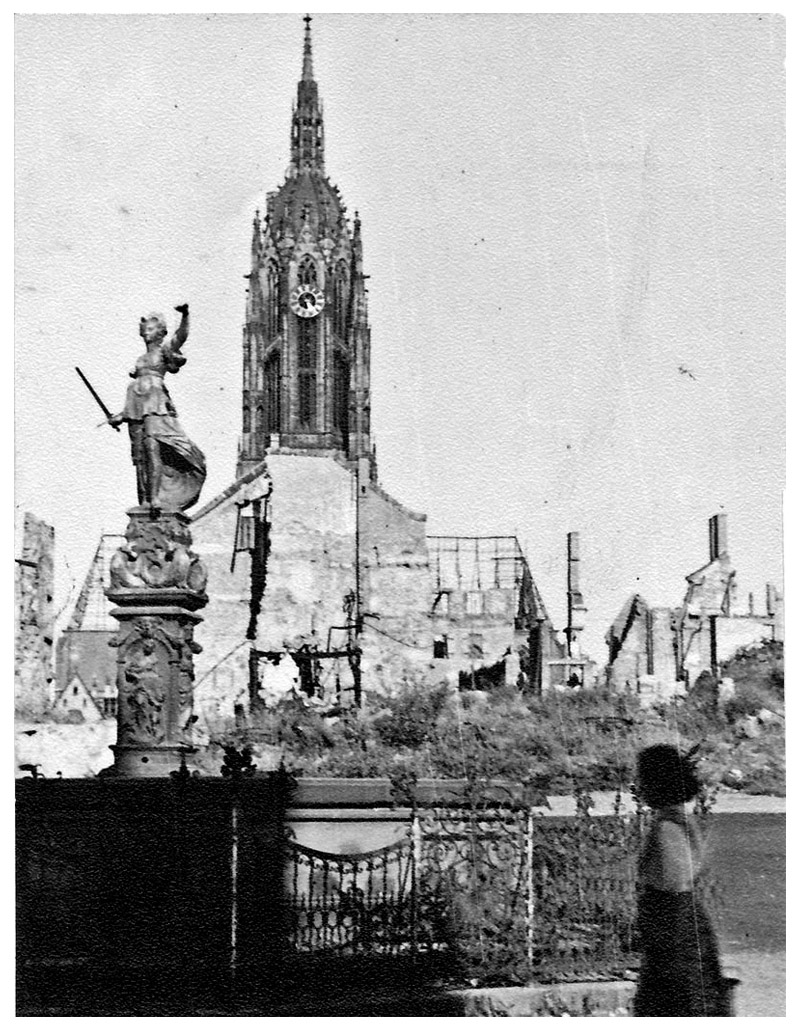 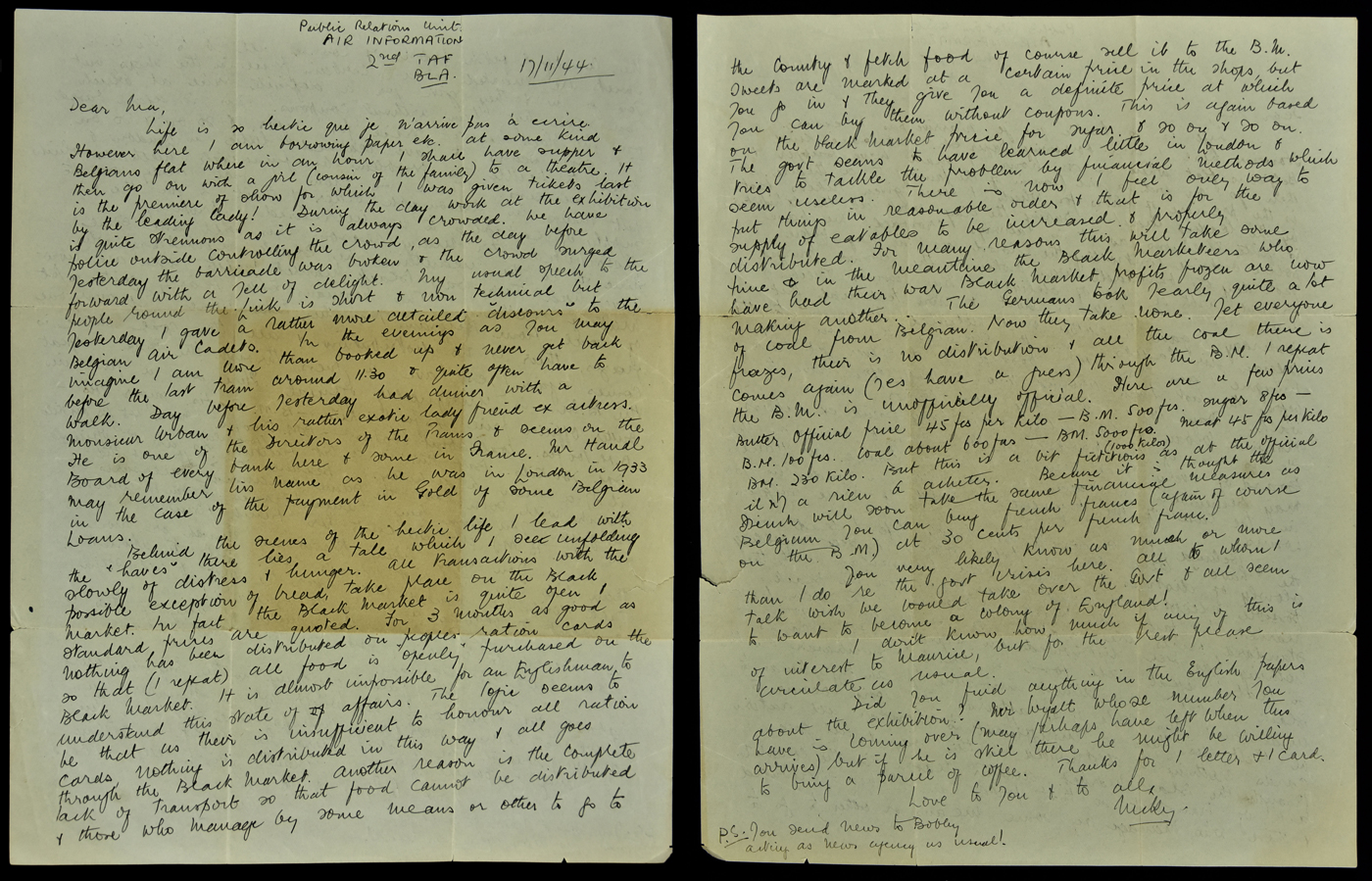 Letter from Nicky to his mother from Brussels, 17 November 1944, during the RAF exhibition. His time in Brussels coincided with the Battle of the Bulge, a last-ditch German offensive into Belgium, which cost many lives before it was eventually quashed by the Allies. It seems extra-ordinary that Nicky seemed to have no knowledge of this battle, as it moved so close to Brussels. His main pre-occupation in this letter was the Black Market in goods in the city and how people were managing to survive. Further letters show level of destruction still affecting the Belgian and German people. 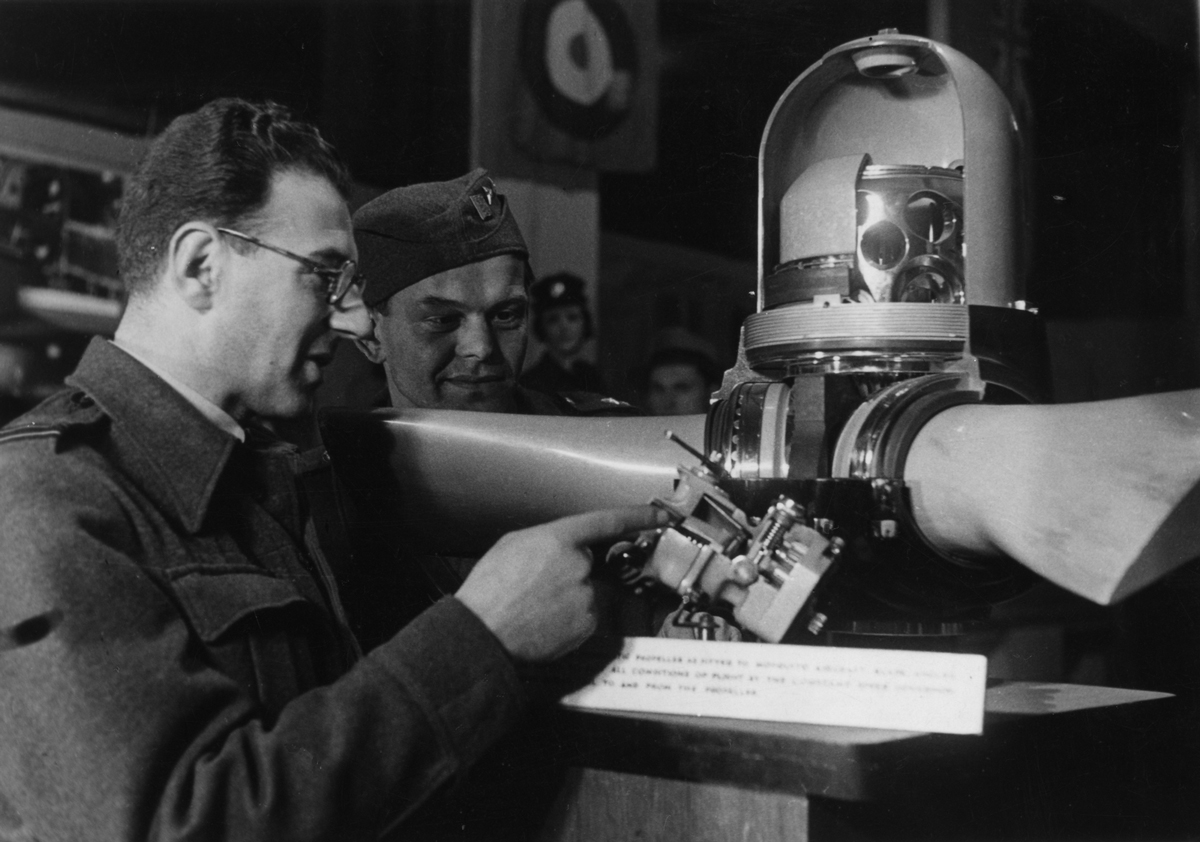 In 1946 Nicky was released from the RAF, at the rank of Flight Lieutenant, and joined the nascent International Refugee Organisation (IRO), initially in London and then Geneva.  His concern for the fate of refugees had persisted and he wanted to help with their post-war repatriation.  However after a few months in that role, he was transferred to the Reparations Department as deputy to the Director, Abba Schwartz.  His task was to assist the collection and monetisation of loot discovered by the Allies which had been stolen by the Nazis from their victims.  The money was to be apportioned as per the Five Power Agreement of 1946, whereby 95% of the non-monetary goods including gold would go to the Jewish Agency to aid Jewish refugees and 5% to groups aiding other victims of the Nazis. Nicky was responsible for the sorting and valuation of the items and getting the best price for them. He took many pictures of the grisly process over the months of intense activity.

Copy of photo of men sorting spectacle frames – which were part of the loot the Nazis stole from their victims. Other photos in the archive show cases of jewellery, watches and clocks and even false teeth. The originals of Nicky’s photos of his IRO work were donated by him to Yad Vashem, along with his Kindertransport scrapbook. 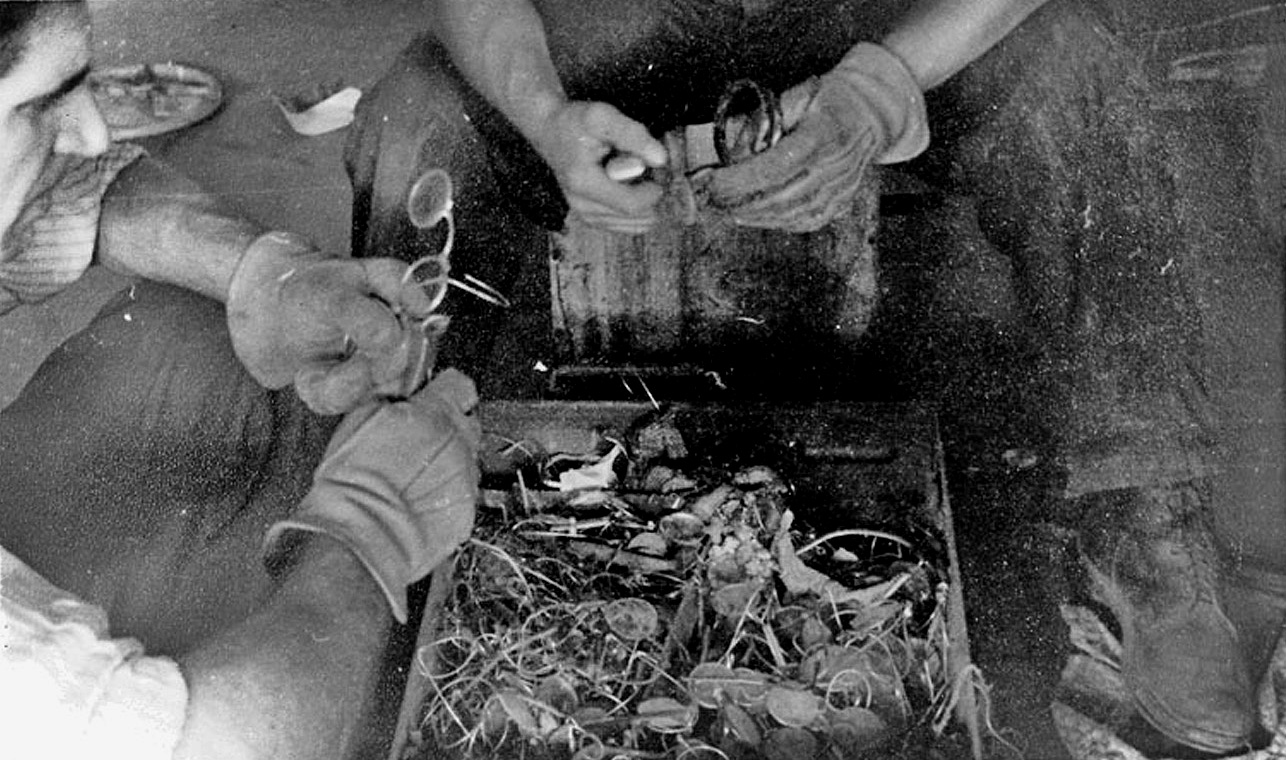 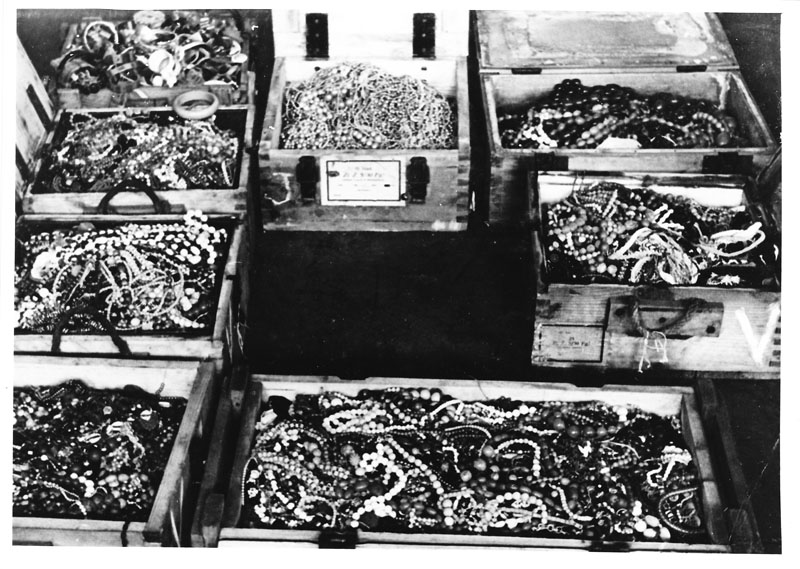 Copy of photo of cases of jewellery

Copy of photo of crates being loaded onto a train containing articles being taken to New York for auction. 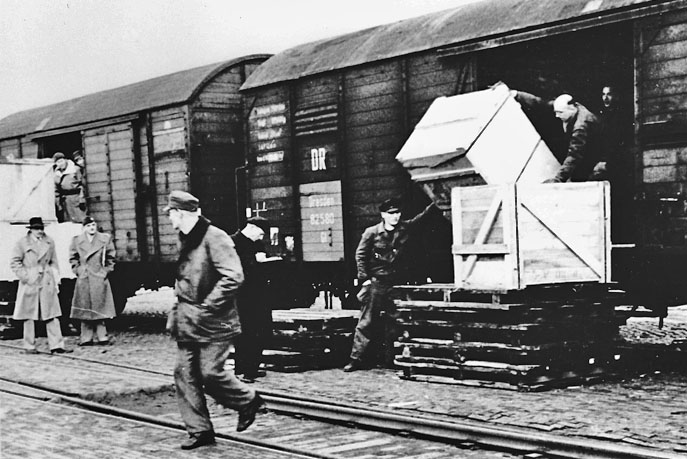 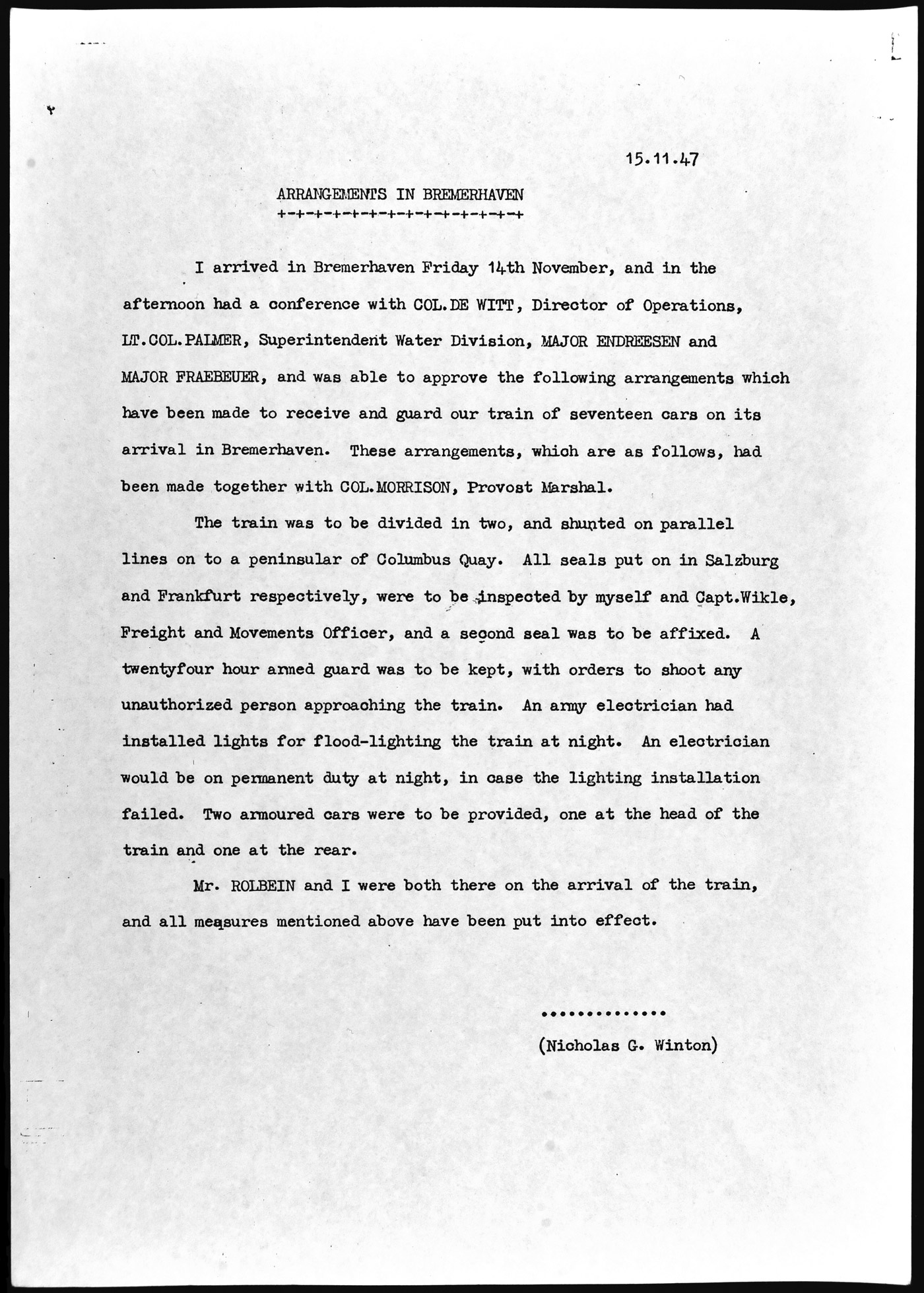 Nicky’s notes, dated 15 November 1947, on the protection of the train carrying valuables to the coast for shipment to the USA to auction. 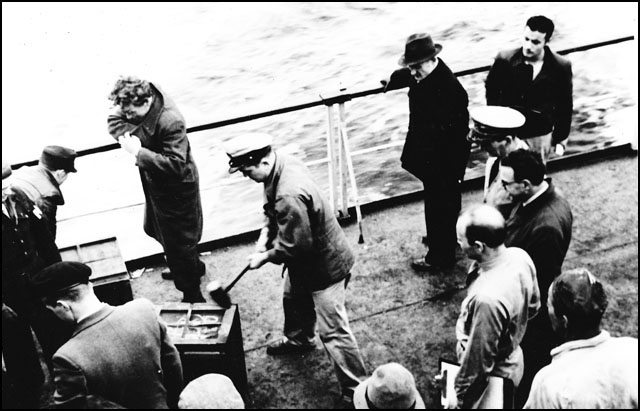 Copy of photo taken on board ship in mid-Atlantic, December 1947 – Nicky far right, centre: witnessing the disposal of ‘worthless’ items into the sea. Nicky was taking a large number of crates of valuable items stolen by the Nazis from their victims for sale by auction in New York. Items considered of no monetary value had nevertheless to be disposed of without entering the German economy. Nicky’s practical but heart-rending solution was to break open these crates and drop them overboard at sea.

Authorisation letter, dated 6 February 1948, from Abba Schwartz for Nicky to take gold and silver bullion to London for sale. 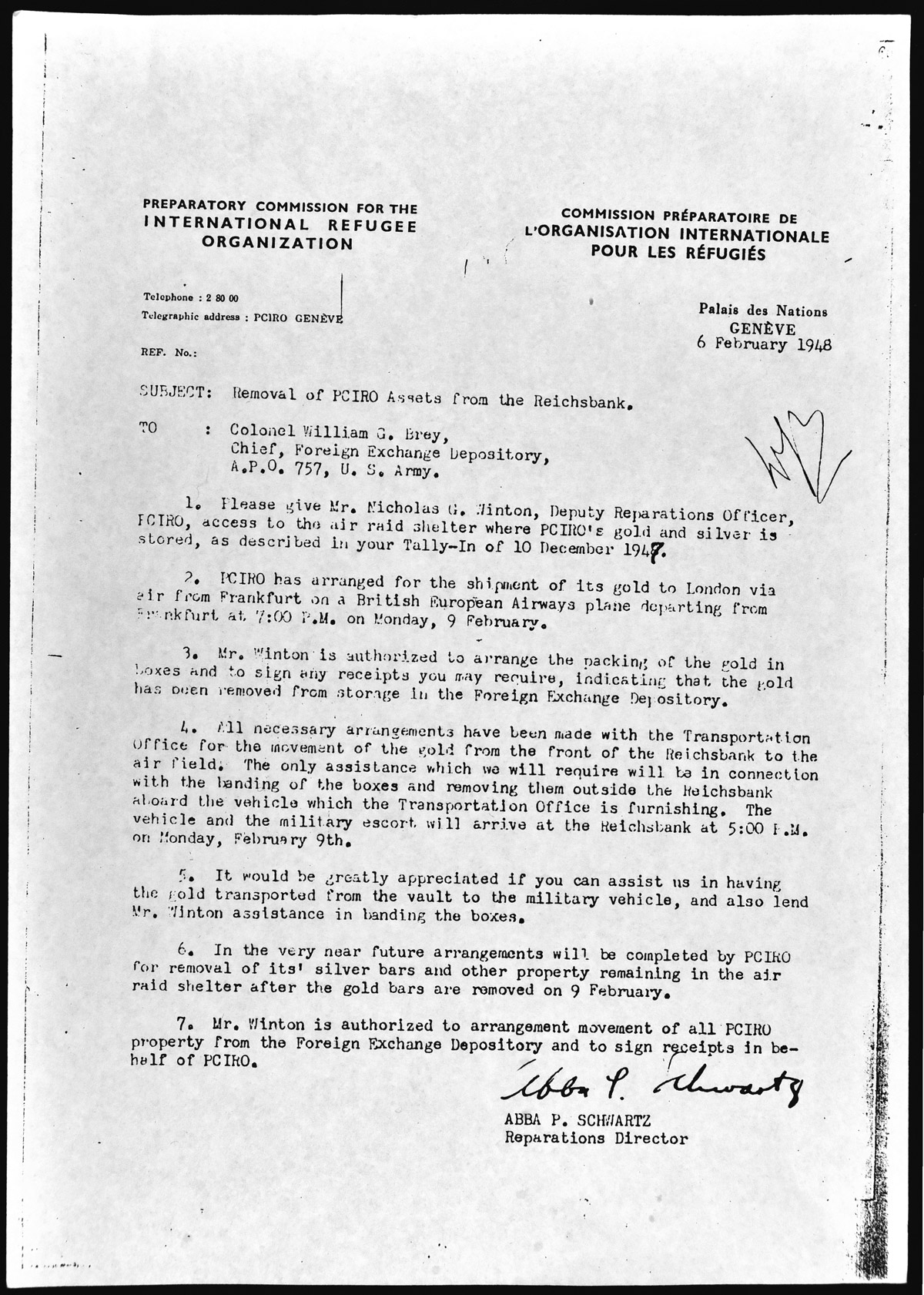 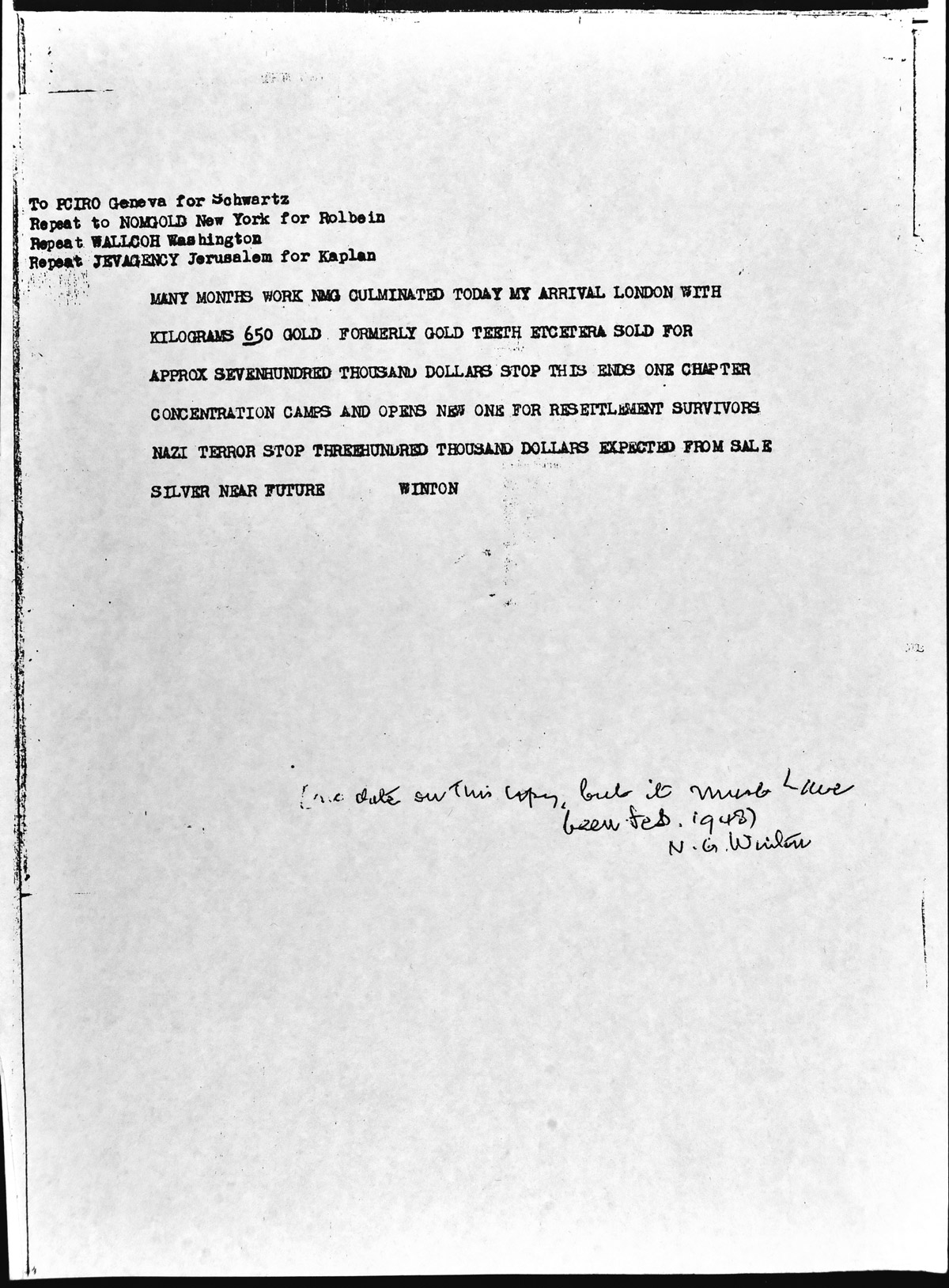 After this job concluded, Nicky moved to Paris to work for the International Bank for Reconstruction & Development which was carrying out the instructions of the Marshall Plan, a US financial loan programme set up to assist the rebuilding of Europe.