It was while working for the International Bank for Reconstruction and Development in Paris that Nicky encountered his future wife, Grete Gjelstrup, the Danish secretary of his employer. They met in March 1948 and married on 31 October that year in Vejle, Denmark, Grete’s home town.

Left to right : Grete, Nicky, Kirsten - Grete’s sister, after their wedding in Vejle, Denmark in 1948.

A framed certificate made by Nicky’s family and his best man Stanley and wife Maudie to celebrate their wedding. 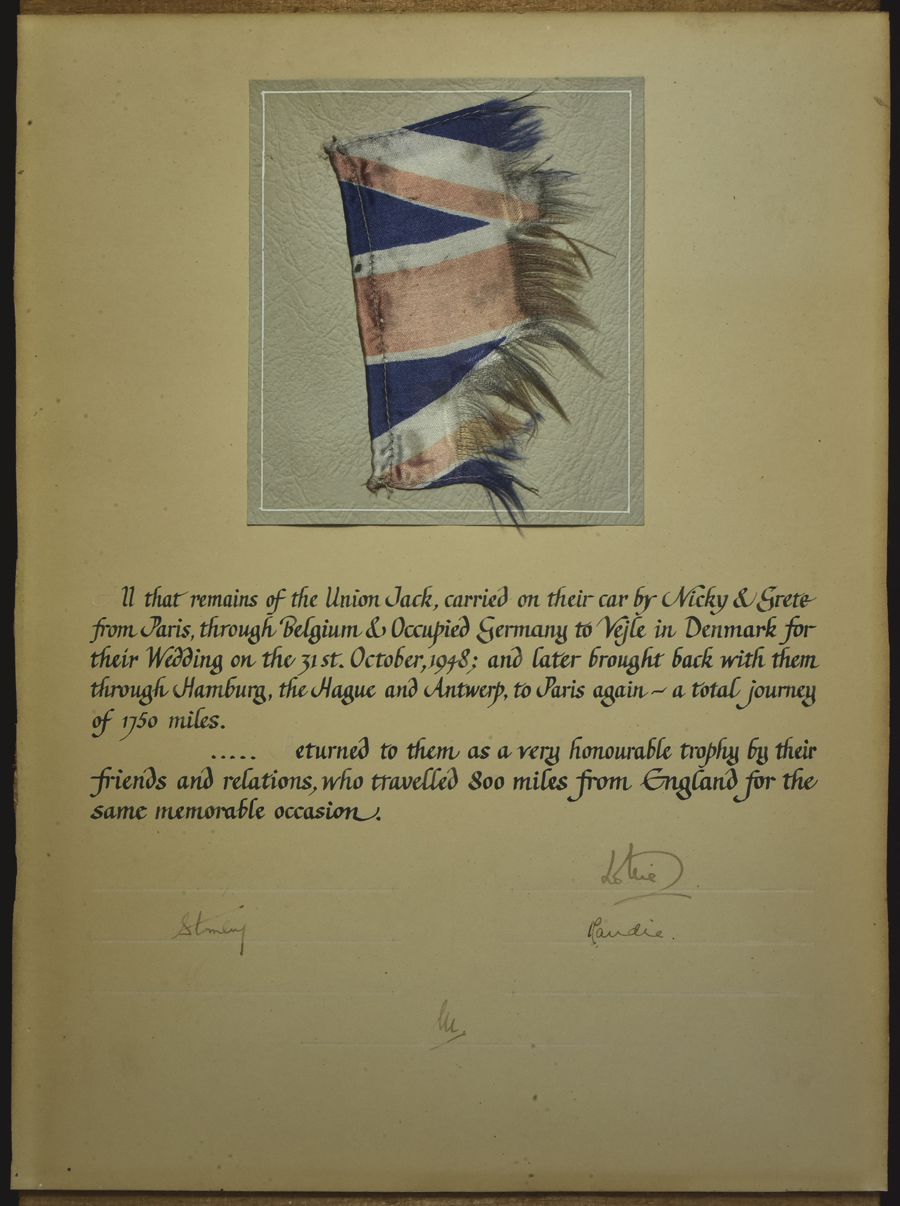 In 1950 Nicky & Grete left Paris and had an extended belated honeymoon in the USA, visiting the many friends Nicky had made during his time with the IRO. They drove down the east coast from New York to Key West in Florida in a car borrowed from Nicky’s second cousin Ernest Friedman who they met in Florida and drove back to New York. Nicky sent many letters home to his mother describing their experiences, particularly the disbelief of the Americans they met to the news they did not wish to stay but were keen to return to post-war Europe. 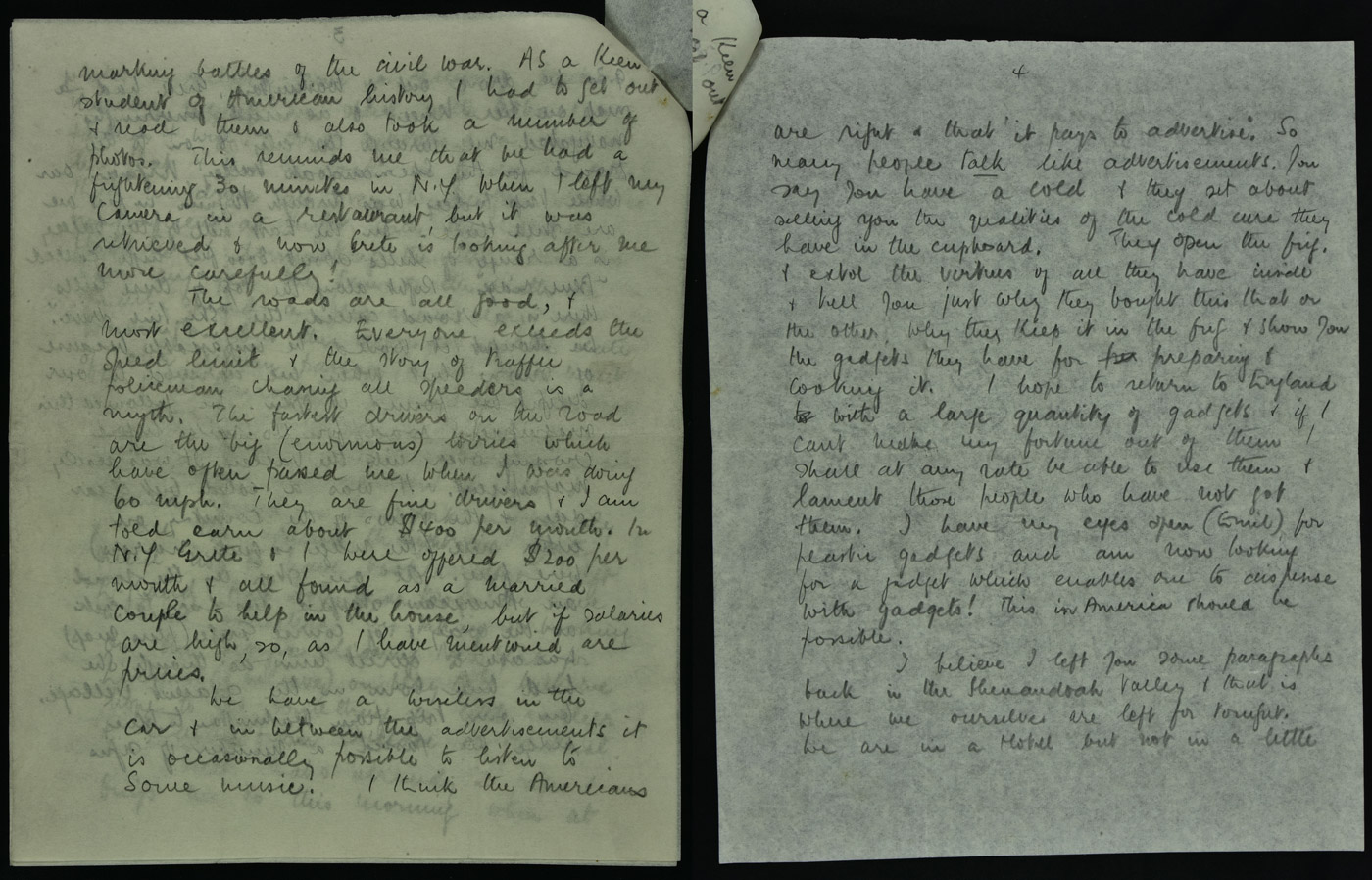 Transcription of part of letter to Nicky’s mother dated 24 February 1950. From second paragraph on…

The roads are all good, and most excellent. Everyone exceeds the speed limit & the story of traffic policemen chasing all speeders is a myth. The fastest drivers on the road are the big (enormous) lorries which have often passed me when I was doing 60mph. They are fine drivers and I am told earn about $400 per month. In N.Y. Grete & I were offered $200 per month & all found as a married couple to help in the house, but if salaries are high so, as I have mentioned, are prices.

We have a wireless in the car & in between the advertisements it is occasionally possible to listen to some music. I think the Americans are right & that ‘it pays to advertise’. So many people talk like advertisements. You say you have a cold & they set about selling you the qualities of the cold cure they have in the cupboard. They open the frig (fridge) & extol the virtues of all they have inside & tell you just why they bought this that & or the other, why they keep it in the frig & show you the gadgets they have for preparing & cooking it. I hope to return to England with a large quantity of gadgets & if I can’t make my fortune out of them I shall at any rate be able to use them & lament those people who have not got them.  I have my eyes open (Emil) for plastic gadgets & am now looking for a gadget that enables one to dispense with gadgets!  This in America should be possible.

I believe I left you some paragraphs back in the Shenandoah valley & that is where we ourselves are left for tonight. …….

Nicky and Grete in Key West, Florida with second cousin Ernest Friedman, who had lent them his car to drive from New York to Florida.  After their Florida holiday, they all drove back together to New York. 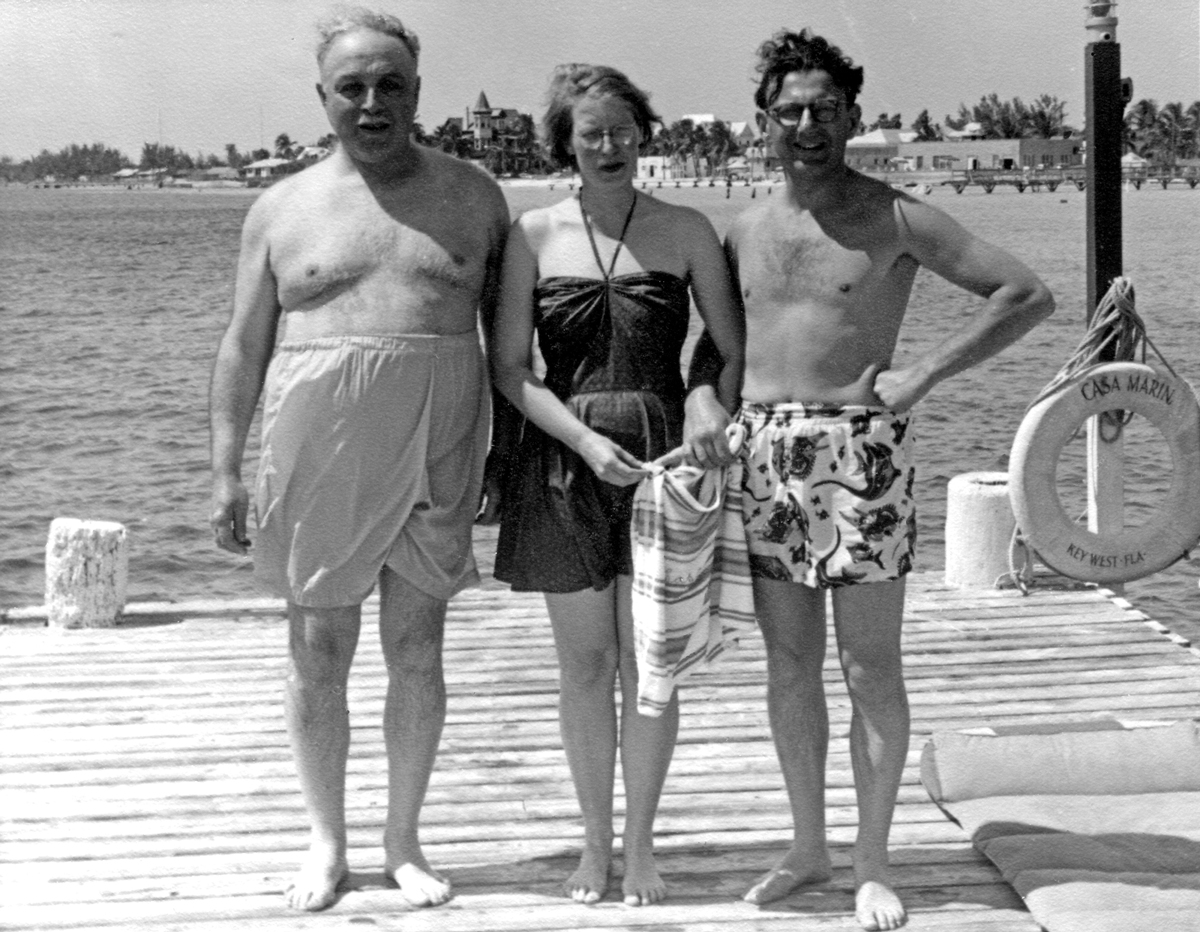 After 3 months, they returned to the UK and once Nicky had found a job, they moved to Maidenhead, 30 miles west of London, where they set up home and remained for the rest of their lives.

Nicky worked as Finance Director for a small factory making the first ice lollies in the UK – Glacier Foods. This was followed by 10 years at a sheet metal factory in Slough in the same role. In the early to mid 1950s Grete and Nicky had three children – Nicholas (1952), Barbara (1953) and Robin (1956).  Robin had Downs syndrome and the general consensus at that time was that Downs children should be brought up in residential homes.  Nicky and Grete decided against and he remained a loved and loving member of the family until his tragically early death in 1962.

Nicky with Robin, his and Grete’s third child who had Downs Syndrome. Sadly Robin died in 1962, the day before his 6th birthday. 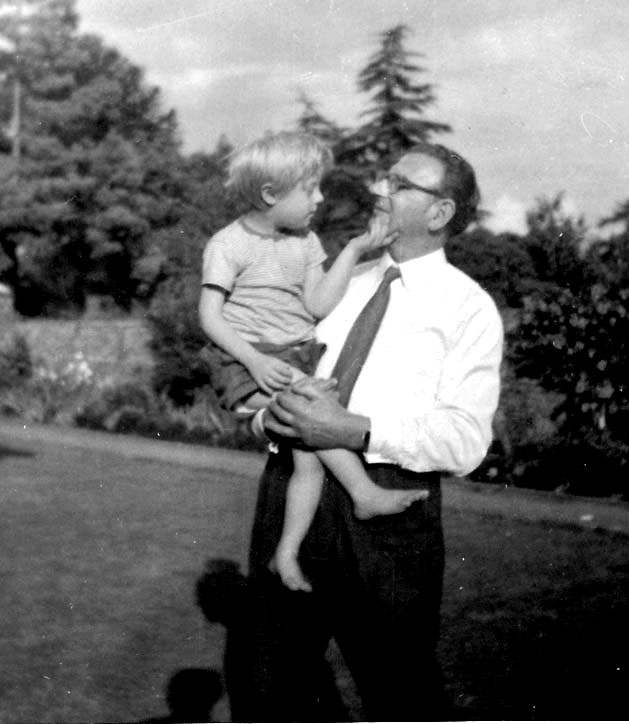 Robin’s condition and lack of support for similar families led to Nicky starting up a Maidenhead branch of what is now called Mencap.  He remained active in the local society for the rest of his life. He had also joined the local Rotary group, of which he was a member for over 50 years, supporting their charitable work.  In response to a talk at one meeting, he volunteered to form a local society of Abbeyfield, the national charity that provides supported housing and Extra Care homes for the elderly.  He worked with them at national and local level for 40 years, fundraising and campaigning for two local Extra Care homes.  Both are named after him – Winton House in Windsor, Berkshire and Nicholas House in Burnham, Buckinghamshire.

In 1983 he was awarded an MBE for his charitable work. 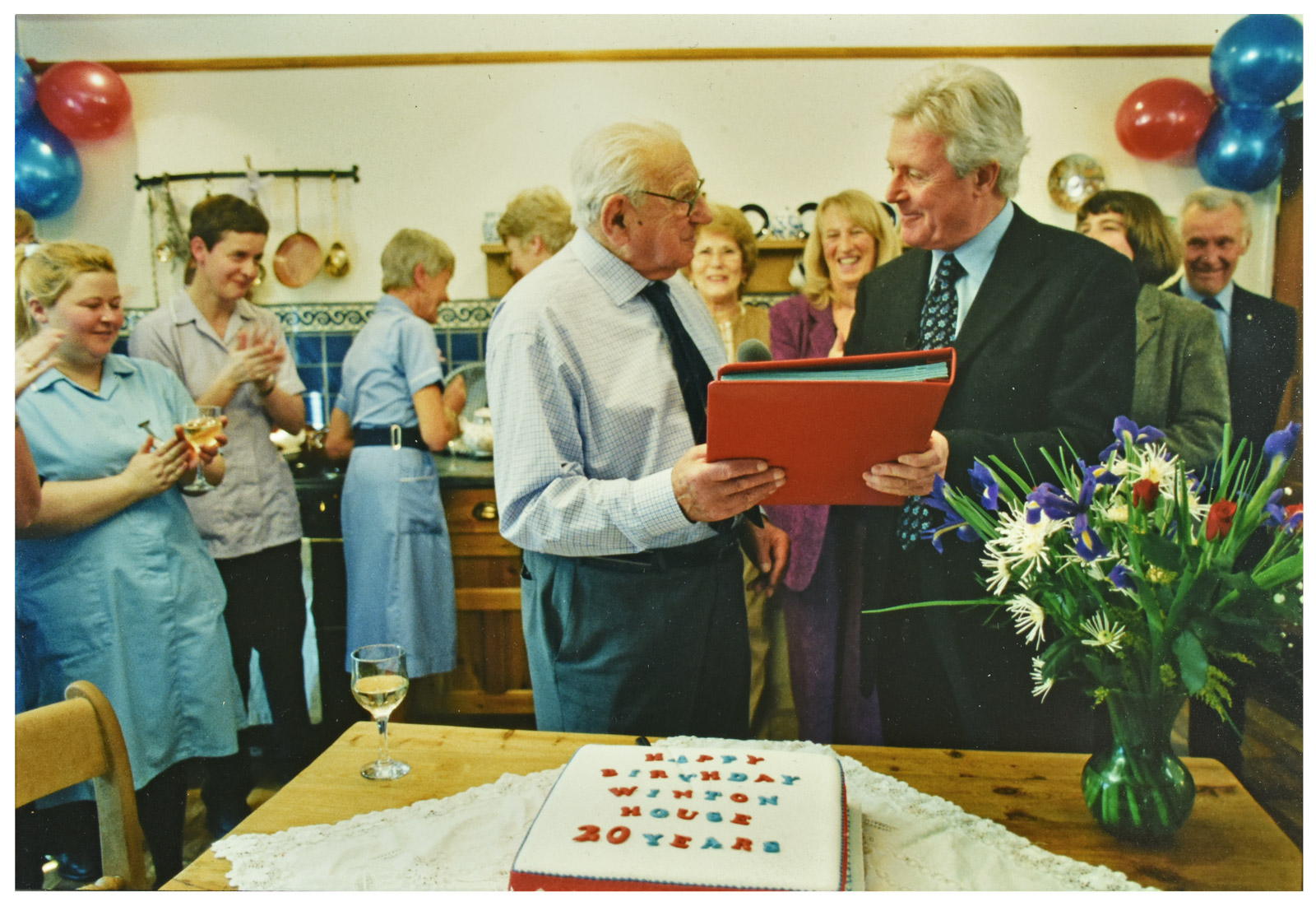 21st February 2003: 20 year anniversary celebration of the opening of Abbeyfield Winton House. While Nicky was cutting the cake, Michael Aspel arrived to surprise him for This is Your Life, the biographical TV programme.

VIew This Is Your Life webpage on Nicky.